Interview With How to Train Your Dragon Character Animator – Steven Meyer

If you read ReviewSTL much, then you should know by now that we love film. Most of the people who contribute to the site have a love for film, and it doesn’t just extend to watching them. I still harbor dreams of being able to make my mark on the world in film someday. So, it is great when you can talk to someone from St. Louis who is currently working in the industry.

Steve Meyer graduated from Webster University right here in St. Louis. After graduating with a dual Bachelors of Arts in Studio Art and Film Production, Steve made his way out to California where he worked on Sky Captain and the World of Tomorrow as an animator and character rigger. In 2005, Steve moved over to Disney Animation Studios where he worked on few of their projects including Bolt and Meet The Robinsons. Finally, Steve made his way over to DreamWorks Animation as a Character Animator for How To Train Your Dragon.

I was lucky enough to talk to Steve for a bit, and ask him some questions about the upcoming release of How To Train Your Dragon. 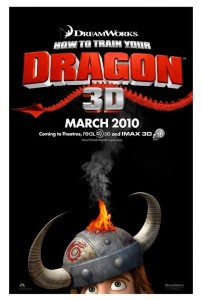 I got to see How To Train Your Dragon a couple of weeks ago, and I have to tell you, I really enjoyed it.

Dreamworks Animation seems to be continuing a good strand of releases starting with Kung Fu Panda, and now How To Train Your Dragon.

Yeah, we are really keeping our fingers crossed that we can keep it up there on the same level as Kung Fu Panda, because that was just revolutionary.

You went to college here at Webster, correct?

Yeah, but I didn’t study animation there.

Are you originally from the St. Louis area?

Yeah, I’m from St. Louis. I actually grew up in South County.

We just had a screening of How To Train Your Dragon at Ronnie’s actually.

Yes, they did. It was a really cool experience. I’d place the 3D up there with Avatar. It is obviously produced to be shown in 3D. Was this your first time working with 3D?

So, you are a character animator, what does your job entail?

Most of the time it works out that we animate as we get footage. Whenever they get footage in they just give it to whoever needed work. So, we weren’t just working with one character. We would work with any character in the shot that we were issued.

How To Train Your Dragon is based on a series of books. Did you guys have to read the source material? I know it strays quite a bit from the books.

You know what, embarrassingly enough, I didn’t. I just came in and kind of hit the ground running. They did have Dragon Flight Training, which was really fun. In addition to learning the software here at DreamWorks, they gave you two additional weeks for dragon training, and learning the behavior and mannerisms. That was all really helpful, and let me hit the ground running since I had never animated dragons before.

What made you want to have a career in animation?

I’ve always drawn and created characters, and when I realized there was a trade where I could bring those things to life. I just really wanted to figure out how to do it. That has been my driving force, to draw and create these things I have been drawing.

On your work history it says you worked on John Carter From Mars.

Yeah, that was actually before I went to Disney. I worked on Sky Captain, and after that there was a crew of eleven of us that went to work on John Carter From Mars from Paramount. Now Pixar has it actually. The property has actually gone through a lot of hands. I heard they looked at what we did, as sort of a platform to start from.

Yeah, I am so glad that it is in their hands.

Ha! Very, very poorly. I’m not very technically efficient. Webster was more of a fine arts background. So, I didn’t get the type of traditional training I might have gotten somewhere else. I envy those guys that can do traditional animation. I actually never considered being that type of animator, because I couldn’t draw consistently. You can draw a character, but to keep it consistent over a number of drawings is something completely different. It was just something I couldn’t do.

How long have you been animating?

Professionally since 2001. I took two flip book classes at Webster, which would have been around 1996. That gave me the foundations of the principles of animation. It was very exciting. So, that was when I started animating. I didn’t finish my demo and get my first job until late 2001.

CGI animation has really changed since then.

Yeah, it just keeps getting better and better. What I love about it is has subtleties that other mediums haven’t achieved. I love the subtle mannerisms that you can’t get in mediums like stop motion and traditional hand drawn.

Has it become harder to animate as CG films become more detailed, and the technology changes?

I think it has become easier. A guy I knew from Sky Captain talked all the time about how he worked on an animated film where he would plug in all the numbers, and he’d have to come back 24 hours later to see it rendered. The interface has advanced so much. It is almost like working with a puppet. You pose the character, and go to the next frame and pose it again. The technology has updated so much, that if done right you don’t have to think about it at all. I think the goal of most software developers is to take that wall away from the artist to make it more natural.

As a character animator do you ever have to work with the voice talent at all? I see that you worked a little on the Sorcerer’s Apprentice, which also stars Jay Baruchel, so you should have met him by now.

Ha! They bring them around at times, but there is so many people, and they don’t need to meet everyone. The bigger the production, the less likely you are to meet the stars. I actually haven’t gotten to meet Jay. I actually would like to meet Jonah Hill, he seems like he’d be pretty cool to hang out with.

Does it seem DreamWorks has high expectations for the film? It really looks like there has been a lot of work that goes into it. Does it looks like they are readying for a big push for it?

Definitely. That is a great thing about DreamWorks, they push all of their movies. They seem to be really proud of the products they create. It is nice when you have that, because you feel like you are working towards something. DreamWorks definitely delivers on that end of things. You sacrifice a lot to work on a film. Ylou sometimes have to spend some time away from your family. So, you really want to see that out there.

What do you think really sells How To Train Your Dragon? Is there a quintessential scene?

There are a couple different scenes running throughout. There are some great father and son relationships, and them keeping that open line of communication. I like that the main character is a don’t judge a book by its cover person. I think their misrepresentation of the dragons, can be applied to things in modern days in many ways. I think it is a great message not to judge people that are different from you. Try to understand people, and you can create a new friendship out of it.

What projects are next for you? Are you signed on to anything?

I had a little gap time where I helped work on their Fall 2010 release, Megamind. Now I’m going back on a Dragons short that they are working on. As soon as I’m finished with that I will be moving on to Puss and Boots which is one of their 2011 releases. It is the first spinoff of the Shrek series.

I know just about anyone who gets into this type of industry has projects of their own they want to do. Any plans to work on anything of your own in the future?

Yeah, I really have that bug, but it is really difficult to find that balance. I have several projects that are pretty much half started, but I had a baby last year, and that pretty much put the brakes on everything outside of work. I want to spend time with my family, and right now that is my number one priority.  Yeah, but a lot of people here have that bug. In the future I would want to keep moving forward with a couple of my projects.

Do you have any advice for anyone who wants to make their way in film or animation?

I actually talk to a lot of Webster students, and now Webster has an animation program. They didn’t when I went there. A lot of students wonder how they make that leap into the industry. I tell them there is a lot of aspects to 3D not just animation, but texturing and modeling too. The sooner they can figure out what aspect they want to do, the better. These big studios want people who are specialized in one thing, and really good at it. Whereas ten years ago they wanted people who were generalists who kind of dabbled in everything. Doing that is probably less likely to get you hired now. That is the advice I try to give, just focus and do it. I tell them to show their work to as many people as they can, so you can get as much feedback as possible. Feedback is the way you grow as an artist.

I know it sounds redundant, and I’ve given that piece of advice so much. It is the advice I use here at DreamWorks. I do a shot, and I turn around and it might be rough. I ask them what they think, and it may not be right always, but I get the feedback and use it.

I think it always is good to stay positive. Being positive goes a really long way in this industry.