Finally, a crappy day of weather in St. Louis so you all may suffer inside like me.

The third entry in the 2010 preview of the Cardinals focuses on second base. Although there are likely three or four position players who could play second, I’m just gonna focus on two of them, because I’m lazy.

At this point last year, the man with the least intimidating nickname in the history of baseball was in the process of becoming the surprise starter at second. After spending his first few professional seasons in the outfielder and trying to prove he is in fact over 21, Tony LaRussa made the decision to transition him from the outfield to second base.

It was indeed surprising, but upon closer inspection, not without reasoning. Skip’s strength is his ability to get on base and make solid contact to all fields. He doesn’t have the speed or power expected of a corner outfielder. In high school, he played shortstop. His defense in the outfield was solid, but not above average.

Skip responded by having a solid season at the plate as well as in the field. Working with Jose Oquendo, his fielding steadily throughout the course of the season to the point where he wasn’t trying to catch fly balls with his head. 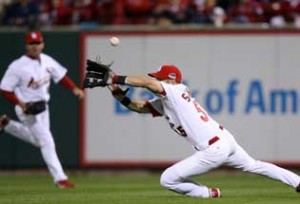 Skip comes into 2010 as the incumbent starter against right-handed pitchers. He won’t earn any comparisons to Rogers Hornsby or anything, but he will hopefully provide some stability to a position that has become a carousel for the Cardinals in the last decade. He will, however, split time with others at second, as his statistics against left-handed pitchers are about on par with my luck with the ladies.

"Why didn't you TELL me you want me to look into your EYES?"

I’ll admit, when the Cardinals first signed Lopez mid-2008, I was skeptical. By the end of the season, however, I was a believer. Felipe hit .385 in 43 games with the Cardinals, but didn’t re-sign, going to the Diamondbacks instead.

Lopez provides a solid bat against righties and lefties, as he is a switch hitter, and his split statistics are solid for each. His fielding is only average, however, the primary reason he won’t be the starter over Schumaker.

As noted, there are others on the active roster that could also see time at second in a pinch. Brendan Ryan, the starting shortstop, could play there if need be, as could the backup at short, Julio Lugo.

Random shameless personal plug: my band No Vacancy will be playing tomorrow night at the Great Grizzly Bear in Soulard, starting at 9. We do mostly acoustic rock covers, some rap, some pop. Come out and get a drink or two. Mock my lack of skill.