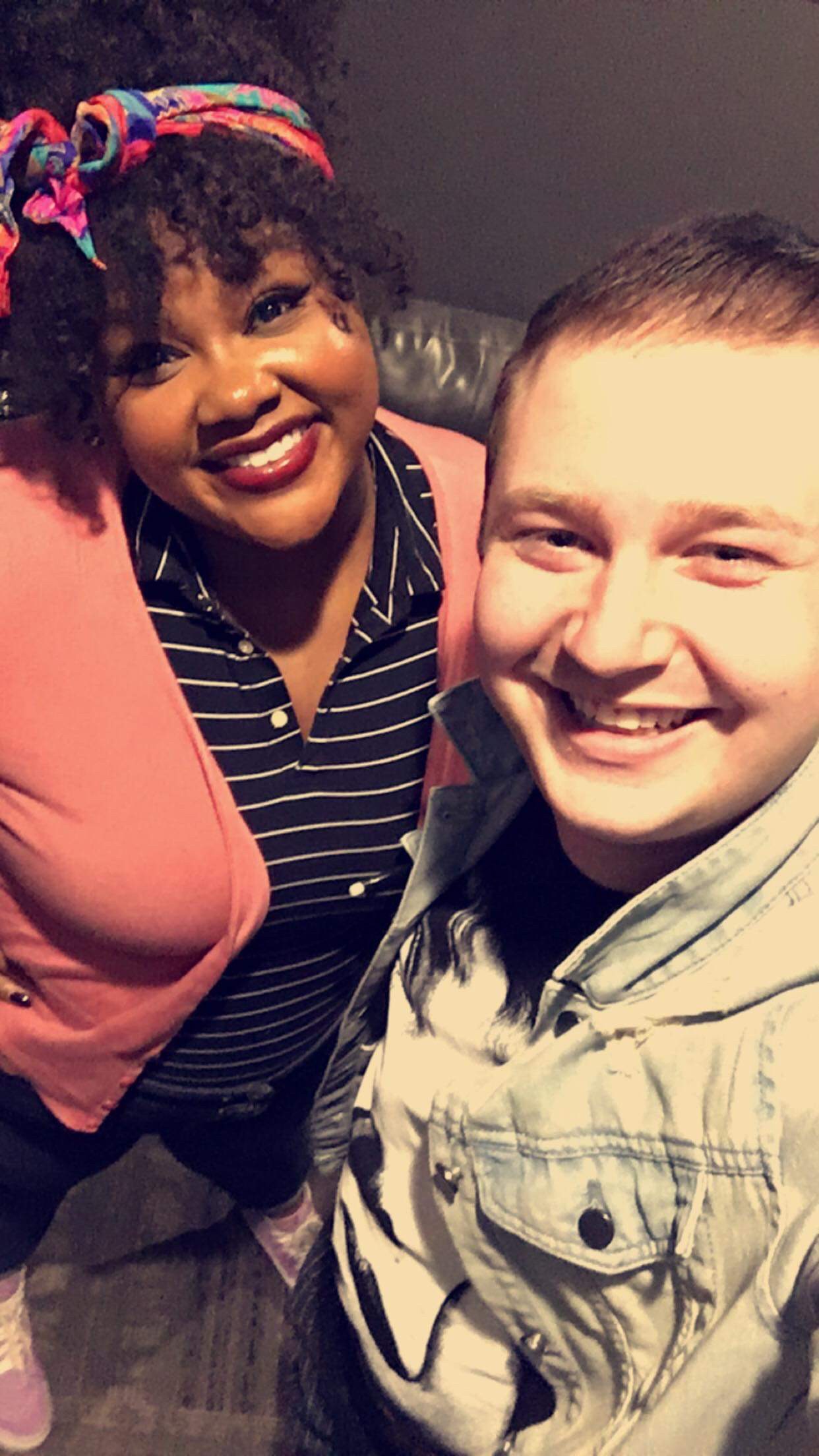 ​After her fantastic set on Thursday night, I had the pleasure of sitting down with host of Netflix’s comedic baking reality show Nailed It! and star of Loosely Exactly Nicole (now available to stream on Facebook Watch,) Nicole Byer, as she answered some questions for ReviewSTL.com after the show about her current career, what audience members can anticipate, and some of the differences between her comedic styles of standup, sketch, paneling, etc.

Matthew Kistner: I am Matthew Kistner with ReviewSTL here with the fabulous and funny Nicole Byer. Welcome to Saint Louis. So, the first question I have for you is what can Saint Louis look forward to in seeing your shows this weekend?

MK: I don’t think anybody will be offended, especially since you managed to fill the house on a Thursday night. You’ll be good to go.

NB: Thursday nights are my favorite shows and it was a real treat that it was full.

Mk: I have a feeling you’ll have a wonderful weekend.

NB: Thank you. I hope people tell their friends and have a good time. I feel like 2018 has been pretty rough for some people. The show is an hour and half, so I hope it’s an hour and half you can escape 2018.

MK: Well I can definitely attest to that, I myself found it very easy to escape the ratchetness that is 2018. So, who are some of your biggest comedic influences and icons?

NB: Adele Givens is a huge influence. I love Adele Givens. She is so funny. She never really popped the way she should have. She should be a fucking megastar. Also, all of the queens of comedy – Monique is great, Whoopi Goldberg is a huge influence for me. I’m trying to work it into my act, to let people feel a little bit. So I saw Whoopi, the revival of her Broadway show in 2008 and it was so good. She weaves in between comedy and making you sad and really pulling at your emotions. Whoopi is extremely underrated. Like, when you’re watching the view, you’re watching a legend. She is just so phenomenal. Who else? I mean, Tina Fey is great. She’s a joke machine. Kimmy Schmidt is jokes jokes jokes. 30 Rock is jokes jokesjokes. So, I like funny women.

MK: The last comedian I had the opportunity to actually sitdown and have a conversation with was Marina Franklin.

NB: Mhhmm. She also is so funny. She too, needs to be a big fucking star. She is just so funny.

MK: Yeah, she came to my college when I was a student and I actually skipped class to go see her. So what would you say you prefer, stand-up or sketch comedy?

NB: Apples to oranges. Stand-up is when you’re alone, and if the crowd doesn’t like you there is no character to come in and save the set. It’s just you. That being said, sketch is super hard. Doing characters can be hard. It can all be hard. But, I like them both almost equally.

MK: Well I guess that leads into my next question, is there a difference between the two that you like more than the other?

NB: No, because they are literally so different. Like, in a sketch, you could have a wig and an accent and you aren’t ‘you.’ Whereas stand-up, you are ‘you,’ or more like a heightened version of you. My jokes mostly come from personal stuff and observations. Improv I love. It may be my favorite. More specifically with my best friend, because it’s just easy. It’s easy to play with her. We know each other so well that I almost know her move before her move.

MK: Well that would definitely make for a fun experience. Alright, next question: How do you handle hecklers?

NB: I interact with hecklers. There was one show, in DC I believe, and I was doing this bit about beauty and size not being mutually exclusive and some man just yelled out “Sexy!” “And I was like, what are you doing? Are you just shouting synonyms? What’s happening?” And then he was like “I love you!” and his wife was like, “He does.” I was like “okay,” because she was wearing a sash and I didn’t have time to unpack that. We spoke a few more times and I asked him if he had enough, and if he was good. He said “yes” and I asked him if he would shut up for the rest of the show…and then he didn’t. So then I interacted with him again, and I told him “Like, you have to shut the fuck up. What you’re displaying right now is privilege. It’s white privilege because you’re a white dude,” and then he shut up because I called him out on what he was doing. But, I interact with hecklers. It’s part of stand-up. Or you can have them thrown out, but I feel like that puts a damper on the set. People will think suddenly that “She’s a mean lady and now we can’t have fun.” Just simply, shut up.

MK: Absolutely. People need to be respectful. This is your job. You’re there to make people laugh. And, if you interact with the audience it should be on your own terms and people need to respect that. So, have you had any embarrassing or traumatizing experiences while performing a stand-up show? If so, would you care to share them with me?

NB: I had a man hug me when I was on stage in New York. I said something about being single and he was like “I’ll love you,” and I said “No, you don’t have to,” and he stood up after I asked him to sit down and he came towards me and I truly cowered because I didn’t know what was in his hand or what he is doing. For me, that was like, he intruded my happy place. So go fuck yourself. And, nobody threw him out. Sometimes, security at clubs – they’re never fast enough. I also don’t think they understand, women aren’t always in danger but I’m aloneand there is a group of people – So if somebody is coming at me, they need to stop that. So yeah, that was awful.

MK: Yikes! I’m sorry to hear that. Any embarrassing moments you care to share?

NB: Not really, maybe sometimes chords falling out – but I just say my diaphragm fell out. But, college kids don’t get that joke.

MK: Ha! I can imagine they don’t. So, what is your favorite aspect of performing for a live audience?

NB: Every show is different when you are in front of a crowd. But also, when you shoot in front of television you are also in front of a crowd because camera operators have seen everything. So, my little secret is if I can get one set member to laugh that means I was actually funny. So sometimes it’s like I’m performing for the camera guys.

MK: So your AD Wes on Nailed It!, your little banter thing, is that meant for the show or is that genuine comedy just between you two?

NB: Well I have never hosted a competition show before, and when we were doing a walk through, it was kind of overwhelming, and I asked, “Well who’s gonna hand us the trophy?” So, somebody said Wes will do it. I decided great, I’lljust yell for Wes on the first day and that sort of just stuck.

MK: Well it worked out well, because that banter is extremely funny. I think my favorite part about that show is the ‘Nicole Nags’ button.

NB: That’s honestly where improv comes in handy. In improv, you walk around on your hands and crawl around on the floor. Be an idiot. Be stupid, because it’s funny, and that can be embarrassing – especially when I’m trying to be annoying. I don’t know though, I have no filter and truly don’t get embarrassed anymore.

MK: Well, I think it works out best for the show.

MK: What was the inspiration behind Loosely Exactly Nicole?

NB: My life. It’s loosely based on my life. So, MTV originally wanted a family show, I don’t know why, but that exec is gone now. Anyway, they wanted a family show so we shot that pilot and then they said they wanted something actually based on my life and was like “Okay.” Christian, the guy I co-wrote it with told me my life is very weird. So, the first season and second season has a lot from my life in it. Like, in the wedding episode – I actually did get married. It’s been so long, so I can’t get in trouble for it. But, I had thirty grand in debt and I was like “Okay, I can use this money to pay off this debt.” Instead, I just bought a new weave and took some improv classes.

MK: Ha! I love it! So being the host of Netflix’s Nailed It!, what is it like to bring comedy to a cooking competition show?

NB: I don’t know how I’d host it any other way. The first season was kind of hell-ish. So, when you shoot a scripted show, like a narrative, there is a video village where everybody sits; the writers, directors, and producers, and you can hear them laughing and they’ll give you direction like “Do this.” or Do that.” This was ten hours of almost silence. I have an ear piece in, and they’ll just say, “Do that again.” I’ll ask for the note, and they’ll say there was no note, they just want me to do something again. And, the camera crew laughs and thinks I’m funny, but for ten hours, I was wondering how they were going to cut it. I mean, I’m glad it turned out the way it did!

MK: I’m sure it’s a relief to hear that it works well. It’s such a great show, it’s so funny and people seem to really respond well to it so far.

NB: Thanks so much.

MK: Do you have any words of wisdom for any aspiring comicsout there that might help them in their career?

NB: Move to a city. Find your tribe. Go to open mics. You’re gonna bomb. You have to bomb to get better. If you can live without doing comedy, do that. That’s what an acting teacher told me once: “If you can live without acting, do that. Your life would just be immensely easier.” Oh, and make content. Make a web series. Make things and put them out there.

MK: Do you keep a journal? Something to write in when you think “Oh, that’s funny. I’ll have to add that to a sketch!”,Something to record everyday things that happen to you that has the potential to make a joke.

NB: No, because I don’t really do sketch anymore. I will have notes; I have dozens of notes, where I’ll look at them later and ask myself “What did that mean?” I do write things down. I have a joke notebook where I write my jokes. I’ll start with a premise and then eventually come back to it. Or sometimes I’ll have a topic and I’ll be like, “This. This is something.” For one of my jokes, I wrote the punchline before I wrote anything else.

MK: Well alright, I think that is the all the questions I have for you this evening. Thanks so much for taking the time to speak with me. I hope the rest of your shows turn out fantastic and you enjoy the rest of your time here in Saint Louis.