I’ve been watching Marlon Wayans and his brothers in movies as long as I can remember. 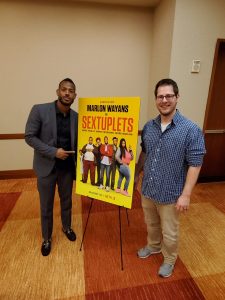 Marlon Wayans and me standing next to the poster for SEXTUPLETS.

It was an honor getting to meet him a few years ago ahead of his horror-parody film A HAUNTED HOUSE 2, and this time around I was able to talk with him during the release of his latest film SEXTUPLETS. You can watch the film right now on Netflix.

Wayans joked that this is the film that finally made his sister proud of him.

“‘You didn’t hump anything, I didn’t see your ass one time… I loved this movie! This is for everybody. This is not just what comedy needs – this is what the world needs! They need to play this at the Hong Kong airport, to stop all the protests,'” he said, doing his best impression of his sister.

Wayans, of course, is no stranger to comedy. Growing up in a family that is considered comedy royalty, he has been performing since he was a teenager.

When Tom Stockman (We Are Movie Geeks) told Wayans that SEXTUPLETS is his best work, the actor responded, “I think so.”

Joking that he is still tired from making the film, Wayans said, “I’m still tired. I’m gonna go get an IV drop after this. I need like ten of them, and I need to cleanse. This is like going to war. I have not recovered, and just can’t catch up on sleep.”

The actor says it is the hardest thing he’s ever done – with virtually no sleep, and going through seven hours of makeup per day. And he didn’t shoot all of his scenes once he was in makeup either. He constantly went back and forth between characters, completing a scene at a time with all of them.

“If I’m filming a scene, and it has four characters in it – I have to do that scene at least four to five times, and each day it’s a different character.”

Wayans says he had an earwig that he listened to in order to respond to previously recorded lines.

“I had to remember what I did as Dawn, in order to react as Alan. And then if there’s another person in the scene, I have to remember what they do. Because it’s interactive and not cutaways.”

Watching the film, I was impressed by the combination of practical makeup and computer imagery to seamlessly blend the characters together.

“This is the camera moving, and motion capture. We did Avengers technology with a Soul Plane budget,” says Wayans.

The filmmakers didn’t use green screen as you might expect when you are layering three or four characters into a scene. Using the motion capture technology, Wayans often acted alongside a stick to remember where to look and how to interact with his previous performance.

“There are all these marks on the floor. The last scene with Jasper, and Alan, and Russel, and [the other character], you look at the floor and there are just marks. It’s like a dance. Everybody is choreographed to go with the marks on the floor, and then we erase all those. But I had to do all those because I’m playing everybody in the scene. So when I’m doing Russell, and I’m reacting to Allan, and they’re having a conversation – they’re not having a conversation. It’s me talking to a stick!”

Rocky Knuckles (DELUX Magazine) asked Wayans if he arranged the poster for SEXTUPLETS – which shows Alan and his five siblings – with his most trustworthy brothers closest to him, and Dawn on the outside.

“Dawn is the most trustworthy one he’s got in his family,” he was quick to respond. “Because she’s the lioness of the group, she’s the one that’s gonna fight. My sister Devon used to fight my battles for me. Me and Shawn fought a bully, and we lost – my sister would be like, ‘Who hit you?’ And she would go get the boy and hold him,’ said Wayans. “Dawn is my sister Devon and Elvira mixed.” 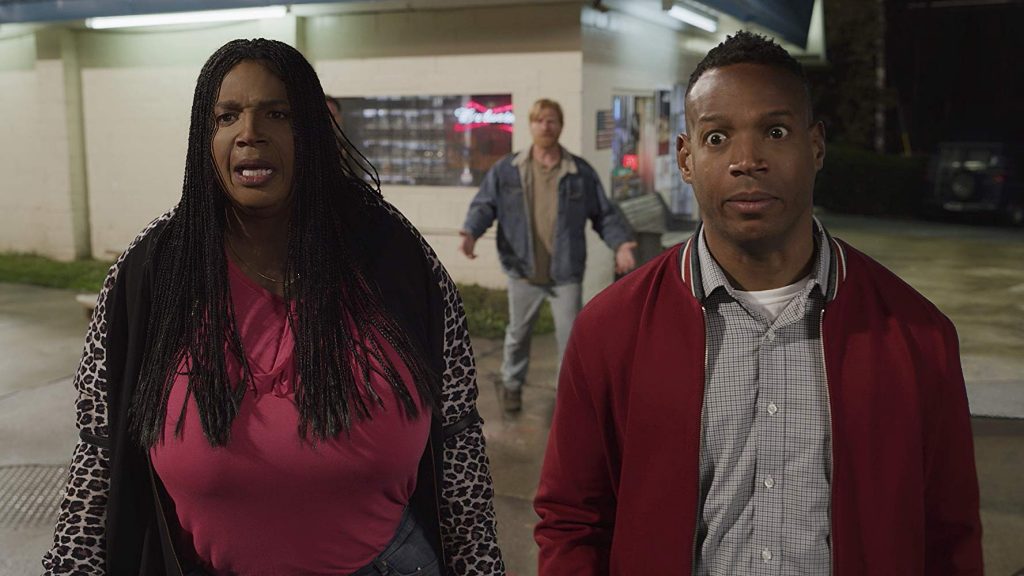 Kathleen Kaiser (Matinee Chat) asked which character Wayans had the most fun playing during filming.

“I had fun playing them all,” says Wayans. “I like Ethan. The reason why I like Ethan – maybe because he’s a little mischevious, maybe because he was the shape-shifter – he started out trying to steal [Alan’s] identity. But he wound up having a heart, and you realize that he had a really tough road.”

He also says Ethan was a challenge, looking identical to himself and having to push his acting abilities to make him appear as a different character.

“As an actor, I’m playing a guy I’m looking like – but the mannerisms, the way they talk, everything’s different. I thought if I can pull that off – the same guy with a different feel – it would be impressive to me.”

Stockman inquired as to the status of the Richard Pryor biopic that Wayans has been attached to. The actor says there is no update, but his career is now taking him on a different path that could end up taking him to that project or even something different now.

“I started off wanting to play a great, and now I want to be a great. So instead of worrying about doing the Richard Pryor story, I’m living – trying to be the Marlon Wayans story. Having that perspective about my life – when it doesn’t happen – that it wasn’t meant to be. And if that movie happens now, because I stayed on the journey… because I’ve been doing standup… because I’ve evolved as a comedian… now I can look at that project with experience.”

Knuckles, after acknowledging that this film is a big move for Wayans, asked what is next for the actor. And when asked if he wants to go back to any of his previous work, Wayans said,

Wayans says social media is a part of the problem – giving more weight to the outrage culture we are currently experiencing. But when he talks about his experiences, things are different than the media presents them.

“People say you can’t do White Chicks now, and I say, ‘Sure I can.’ Why? Because you know who loves White Chicks the most? White chicks. So you know what that makes it? A G–damn good joke! The people that you’re sending up are laughing the loudest. So as long as you do things with kids gloves, and you make it an inclusive laugh, there’s no wrong in comedy like that. Offensive is when – if I do Dawn, and black women hate it – I got a problem.  But if I do Dawn, and Dawn is black women’s favorite character, then I did that. Every now and then you are going to get sensitive people, who were just raised in a bubble… that’s not people.”

And when he does standup, he sees the complete opposite of outraged people.

“I do standup every weekend. And people laugh at the darkest, craziest joke as long as it’s funny. Even if you get an, ‘Ohhhhhhh….’ And it’s dark, so in a dark room you hear the, ‘ohhhhhhh,’ dig a little deeper and you get a big laugh – people are going to respect you for that. They forgot that they had an opinion. People are not sensitive, but [the media] wants you to think they’re sensitive.”

Wayans sites Eddie Murphy as one of the biggest influences in his career. And although Murphy is known for playing multiple characters in films – similar to what Wayans is doing in SEXTUPLETS – he says that comedy is always continuing to build on previous influences.

“That’s why greats, and legends, do it – to influence young potentials like myself. Eddie wasn’t the first to do it – and he’ll be the first to tell you – Pryor did it before him in WHICH WAY IS UP? And Pryor was heavily influenced by Chaplin and Peter Sellers. Sellers did DR. STRANGELOVE, and Chaplin in THE GREAT DICTATOR.  So, it’s kind of like the tradition. Yes, Eddie did it and I don’t think anybody will be able to capture what Eddie did. But if you’re gonna do it, you gotta take it up a notch. And I think what I was able to do was not just create original characters, but have the cameras moving. And to make people forget that I’m playing seven original characters.”

SEXTUPLETS is now playing on Netflix.