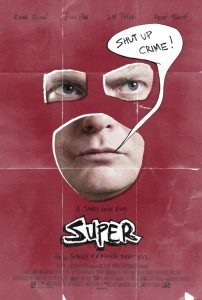 St. Louis native James Gunn’s new film SUPER is now in theaters in a limited release.  I recently got a chance to sit down with the writer/director to talk about his new film, other recent inspirations, and his favorite St. Louis stops.  Some of you may be unfamiliar with the director so let me first give you a brief rundown of his career.

Gunn grew up in St. Louis.  I know what your first thought is, “Where did he go to high school?”  St. Louis University High.  He then went to SLU and soon moved to L.A. after.  His first writing work was TROMEO AND JULIET where he was also an uncredited co-director.  He then wrote SPECIALS starring Rob Lowe, Thomas Hayden Church, and Jamie Kennedy.  His writing credits include SCOOBY-DOO 1 and 2, the DAWN OF THE DEAD remake, and his directorial debut SLITHER.  Now five years after he saw success with SLITHER, he is out with his newest film that he wrote and directed, SUPER.

How did the story for SUPER develop? What was your starting point, and how did it evolve?

Back in 2002, I wanted to direct a short film because the only stuff I had directed was weird stuff for Troma and things like that.  It wasn’t really the type of stuff that I could take to…like the guy who produced SCOOBY-DOO really wanted to produce something that I had wrote, and I didn’t really have something that I could show him that I could direct.  So I decided to write a short film about a guy who was a superhero but kind of a stalker.  And that’s what SUPER started out as like a stalker and a guy who put on a costume and stalked his wife dressed as a superhero.  But I kind of fell in love with the characters so I sat down on April 2, 2002, and I wrote 57 pages in one day and it just kept growing from there and getting bigger and bigger.  I especially fell in love with Libby and Frank and what was going on between the two of them, but I also loved the other characters. It just kept growing into what it is so it was very organic in that respect. And the ending was sort of a surprise to me because normally I write with a rough outline and with this movie it just sort of happened.  I can’t explain it. I almost made the movie a bunch of times and it didn’t happen, didn’t happen, didn’t happen until finally Rainn Wilson got the script, and he saw the movie just like I did.  Which made him different from all of the other actors who auditioned for the role because he saw it for all of its weird shades because it is part vigilante, part spiritual fable, part cinema verite drama, and part dark comedy.  He got all of those shades so once he was on board I knew we were going to make this movie.

So between writing the script and starting to film did you always see these other films and think “Oh this person would be great in this role”.  I know you have said that John C. Reilly was originally thought of to play Frank.

Yeah originally I did have John C. Reilly in the role, but it was back in 2004 and he wasn’t considered a big enough star at the time.  So I would see a lot of actors and a lot of crew people as well. Steve Gainer who is the DP on the film, I saw his movie BULLY not too long after he shot BULLY, the Larry Clark film, and I thought “Oh that’s exactly how I want SUPER to look”. And I remember my first producer to get that because SUPER is an ugly movie, you know.  It is really hand held and it’s beautiful but it’s ugly.  And I’m like “That’s what the movie should look like”.  So I got Steve Gainer to end up shooting the movie.

Obviously you are going get a lot of comparisons to KICK-ASS.  Mark Millar has  said you two were actually talking while you were both writing these projects. Tell me what those conversations were like.

Mark Millar was a big fan of DAWN OF THE DEAD and then SLITHER.  Around 2004 or so, Mark started emailing me because we were both on Joss Whedon’s e-mail list and telling me how he loved my movies.  We became friends because I loved his comic books especially his run on THE AUTHORITY. I thought was amazing. And we started talking, and he was actually setting me up with Marvel.  I was gonna write a series for Marvel, but I got distracted.  He said “What are you working on?” and I said “This movie SUPER.  Chuck Roven is producing.  It’s about this guy without powers.  He puts on a costume.”  He wrote back “Oh shit, I am writing kind of the same thing.” Independently he was kind of writing the same thing. Yeah it’s true. There are 8,000 bank heist movies.  There is 5 superheroes without powers movies. HEROES AT LARGE. SPECIALS. DEFENDOR. KICK-ASS. SUPER. They are all very different films.

Do you have a favorite scene in the movie?

It is probably Frank’s first prayer. I think that’s my favorite. Part of it is that Rainn is so amazing in it.  Part of it is just because I like that scene in the movie, and part of it is because we shot that on the second day.  I knew that this movie totally hung on Rainn’s performance and Rainn would have to hit it out of the ball park for it to really work. When Rainn did that scene I knew that he was amazing in it and that this performance was really going to work.  And I am sitting a couple feet away from him with the little clam shell monitor watching what he was doing, and I was like so touched by that performance which is also funny at the same time so its got like that weird mix of emotions in that one scene. And so I really love that scene a lot.

What recent films have really kind of inspired you or gave you ideas for other things?

Did you see this film mother? This south Korean movie. Its like my favorite movie of the last few years. That movies amazing.

You’re from St. Louis.  What are some of the things you have to do when you come back into town?

Yeah all of the stupid stuff. Imo’s. Every St. Louis cliché there is.  Imo’s, Ted Drewes. I mean, it’s ice cream, but its good.  Those are like the two things. Tony’s restaurant down in the city. I went there with my parents last night. The zoo. Those are the things I usually do.  I usually go to Imo’s right when I get into town. Like before I go home to my parents house where I stay I stop. Cause I love St. Louis pizza. Like that’s pizza to me.