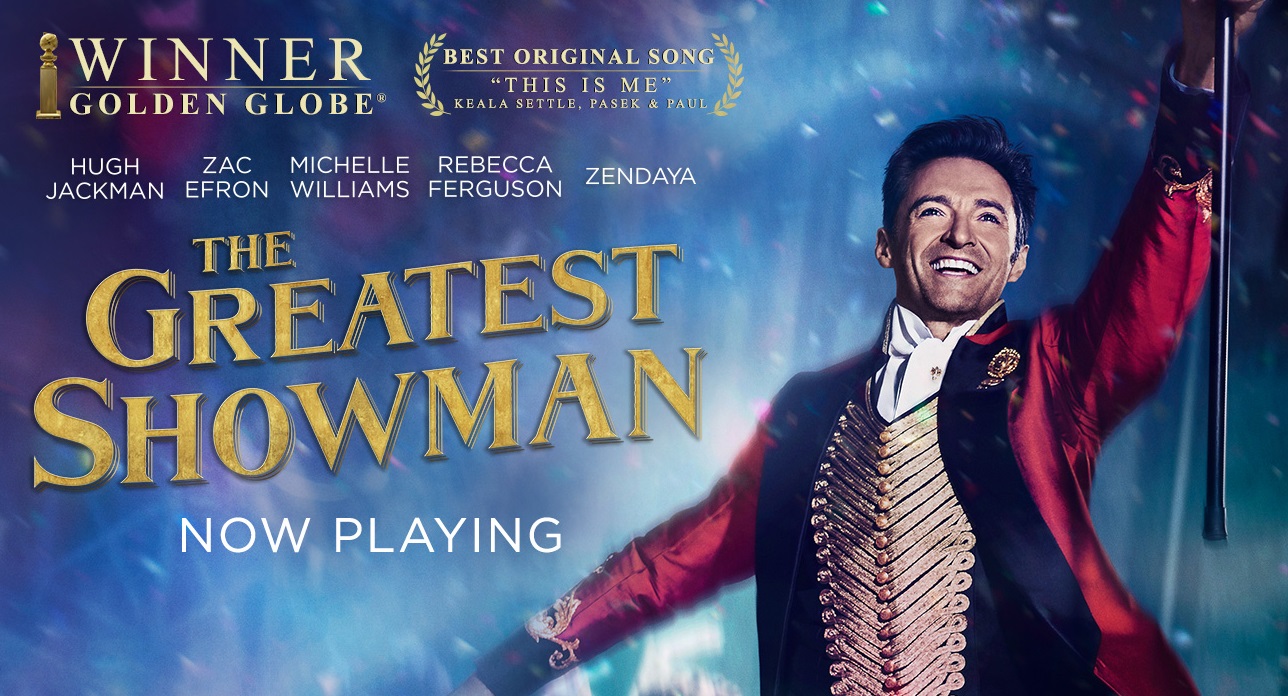 Movie musicals are making a comeback, and there is no better time and place for a feel-good film like The Greatest Showman.

The story is inspired by the life of legendary showman P.T. Barnum, played by Hugh Jackman. He is joined by Michelle Williams, Zac Efron, Zendaya, Keala Settle, and many other extraordinary entertainers.

The man responsible for the choreography in the film is Ashley Wallen, an Australian native who has been dancing since the age of twelve. He has toured Australia and the UK with Kylie Minogue, appeared in films like Moulin Rouge! and The Phantom of the Opera, and choreographed work for Madonna and The Black Eyed Peas.

From Music Videos to the Silver Screen

Ashley moved to London fifteen years ago when he was 23. It was there he met director Michael Gracey.

“He was directing a music video back in Australia. A mutual friend told me that I should check him out, so I ended up choreographing a music video for Michael.  Which in turn, he loved what happened, and yeah – fifteen years later we’re still working together and doing The Greatest Showman.”

Below is one of Ashley and Michael’s early collaborations, the music video for Charlotte Church’s “Call My Name.”

However, their most recent collaboration didn’t come together immediately.

“We shot a commercial with Hugh in 2009, and that’s when he approached Michael about the script. And it must have been about five years ago that we got “Come Alive,” that Benj and Justin Wrote. It was a simple version of it, and I would workshop stuff in London and send it to Michael.”

After “Come Alive,” the songs would trickle in one at a time as Ashley created the choreography.

“This Is Me” came after that, and those were the two that I did here in the studio in London with some dancers. And then obviously, as it got a bit closer, more came in. But they were the two that we had for a while.”

There is a fantastic video which captured 360-degrees of one of those workshops, and actually transitions into the rehearsals on-set. It’s well worth a watch to see how Ashley’s choreography evolved from the London studio to the big screen.

“That was in 2014, so four years ago. The workshops were really quick unfortunately, because the movie wasn’t greenlit yet. I don’t have the budget to pay for all the dancers, so I have to get it done super fast.”

All the hard work finally paid off when it came down to one important performance.

“We had the big workshop in New York, the last one where all the execs came – and that was the deciding moment that it would get made.”

The workshop Ashley referred to was the turning point for greenlighting the project, and was captured on video. The energy in the room was undeniable.

“It was amazing. But I’ll never forget Michael the night before, he said, ‘Oh my God, Hugh’s just been told he can’t sing.’”

That’s right. Hugh Jackman, the lead role in the musical they were workshopping to greenlight, was unable to sing due to a recent surgery. So they had Jeremy Jordan (Newsies The Musical) fill in, with Hugh standing next to him – emoting, and anxious to join in. And that he did, which can be seen in the video below. It’s no question as to how the film was given the go ahead after that performance.

Once rehearsals started for the film, Ashley was given an incredible 8-weeks with the actors to perfect his choreography.

“All the actors, all the dancers, five or Six days a week I think. So it was a big rehearsal period, which is unheard of – getting Michelle Williams, Hugh Jackman, Zac, Zendaya. For eight weeks, all in the room to rehearse. It was great.”

The magnificently surreal dance sequence on the rooftop between Hugh Jackman and Michelle Williams for “A Million Dreams” was the first number to be filmed.

“That was a set – it was amazing! The skyline, and the moon and all that was like a 360 on a huge sound stage. That’s Seamus [McGarvey], our director of photography. The stuff he does is really beautiful.” 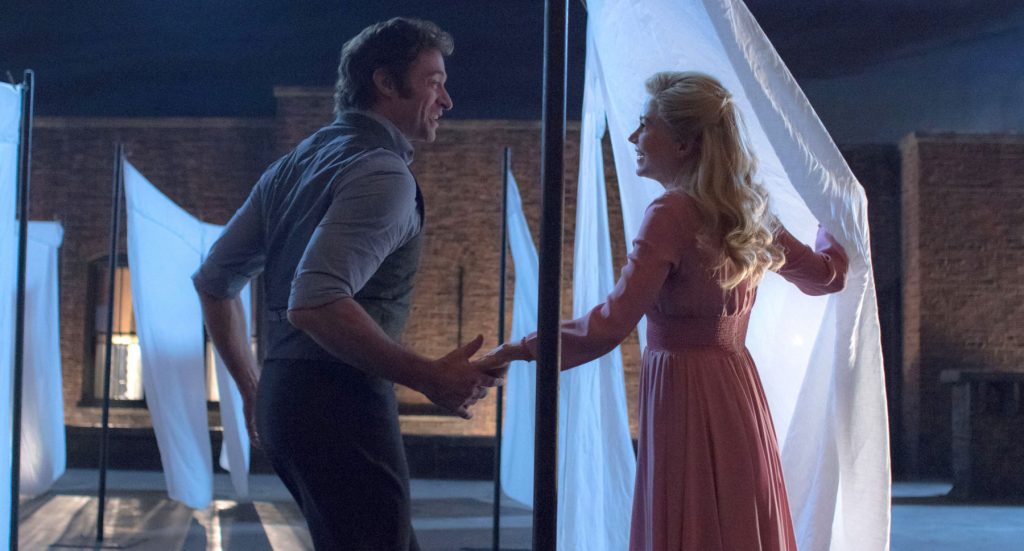 That rooftop scene is one of the few that focuses on only a couple of subjects. Many of the numbers revolve around a huge cast of performers at Barnum’s Circus in the film. When discussing the challenges of choreographing a dance with so much going on, Ashley said,

“Obviously you have all the circus people, and then all the dancers. And it gets quite dangerous – you have confetti falling, and sawdust in the ring. There are people back-flipping, and cameras. So it’s a lot to get organized, and we could do quite a lot of takes over and over again. And with the circus people we have to be spot on to do less takes, because they can’t do as many as we would normally do. It’s so dangerous, and with what they are doing to their bodies. So that was the hard one, having to make sure that our dancers were ready to go. And with Hugh, you have hat tricks going on. It was a lot of stuff, and a lot of me yelling on a microphone!”

When these sequences come together during the final product, they are nothing short of perfection. This comes as no surprise, as Ashley says director Michael Gracey is a bit of a perfectionist. Take for example at the end of “Come Alive,” when there are twenty or so performers turning in unison.

“He will not move on until he sees it right. And in that, we had Chang and Eng (Yusaku Komori and Danial Son) hooked up together, and that restricts them just as a single person doing a spin – looking up to camera. So that was hard. Lettie (Keala Settle) has that huge dress, and Daniel has that big fat suit on. And a guy with three legs!”

Later in the film we see the beautiful love song, “Rewrite the Stars,” performed by Zac Efron and Zendaya. It’s a wonderful mix of ground movement and aerial work to create a completely unique romantic encounter.

“That was probably the most challenging one. We ended up shooting it quite a lot, because there was a lot to get done. I started off doing all the stuff on the ground – because that’s where I belong! And then we had Max (Torandell), the circus guy, come in to help figure out the aerial stuff. There were so many different elements, with them flying, and certain points that have to be right. It was tough.” 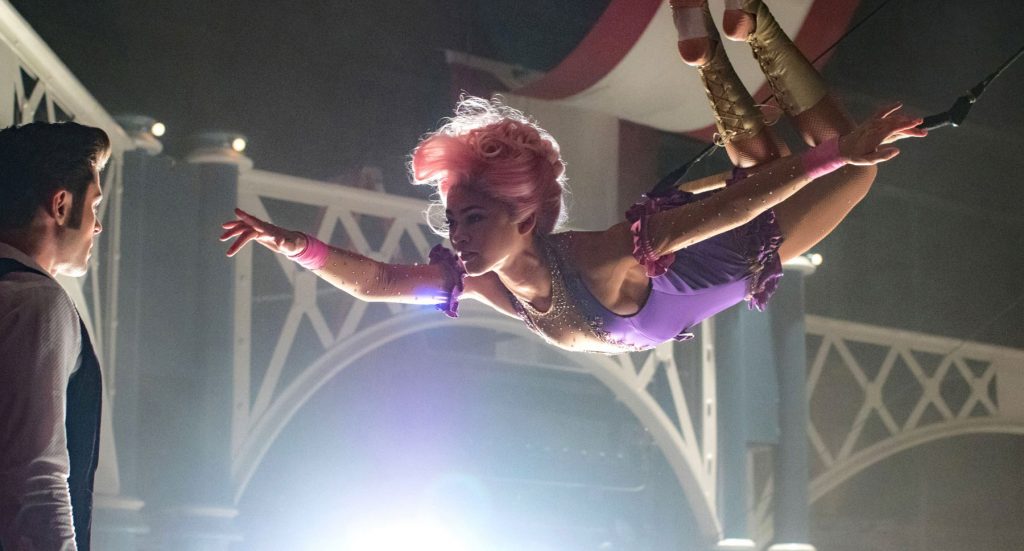 Part of what makes the number so incredible is having Zac and Zendaya performing so much of their own work.

“They were great. Zendaya was just phenomenal, and Zac – they were both great! Physically it’s hard, and then all the different elements with the tricks.”

Throughout the film, Zendaya has several trapeze stunts that she did herself. And the result was fantastic.

“She was incredible! That girl comes in, and most of the time she would only do like two takes because she does it so amazingly! She’s phenomenal.”

Filming that sequence was only set for a couple of days, but ended up going four or five. In the end, the extra time clearly was well worth it. The result is mesmerizing.

While Ashley was working on the choreography for the larger numbers, he had the help of Daniel ‘Cloud’ Campos for “The Other Side.” You’ll instantly recognize Daniel as the bartender in the meticulously crafted bar scene with Hugh and Zac.

“He came up with most of that number. And I remember watching in the studio, that was a tough one for Hugh and Zac. Everything was synced with the beat and the music. But they pulled it off, and it’s really good. You watch it, and you don’t realize how hard that really is.”

Not only is the sequence a feat of choreography, but also editing and sound mixing. There is an incredible attention to detail – with every glass, bottle, and even chair movement. The complexity of the number becomes more and more prevalent upon multiple viewings.

“And trying to make it natural from an acting point of view, with the beat and music is tough. But it’s brilliant.” 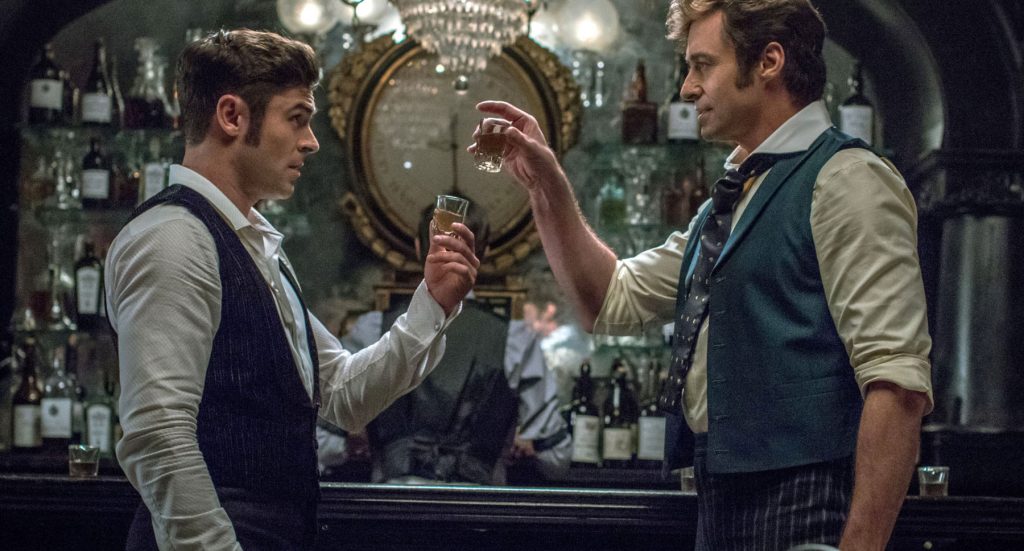 The penultimate number of the film is an epic one, where “From Now One” features a powerful dance scene with Jackman and most of the circus performers back at the pub. We eventually see Jackman running and singing back to familiar territory, all intercut with the energetic bar number. The result is incredibly moving.

“That’s one of my favorite ones. The story behind that song, and the emotion to it, it made the dancers go that extra mile with their bodies – physically. That was a tough one because we only had two days to shoot that, and it’s a tough routine on the body. And we’d do it over, and over, and over.”

A few weeks into release, the film is breaking records and quickly has become one of the most longevous films at the box office ever. It’s no surprise, given all of the incredible sights and sounds it has to offer. Not to mention the powerful message of the feel-good story.

“I think the message of the film is so fitting for the world we live in at the moment. Especially with social media, and young kids getting bullied or feeling left out. I think it’s such a perfect time for this movie to come out for people. That, and then having the music to go with it, I think propels it even more-so.”

And while the story and acting are fantastic, you never have to wait long before getting to the next great musical number.

“I saw a cut of it early on, and then saved it for the premiere. And one thing I noticed is how quickly another song comes on. It’s great, the energy just keeps going. 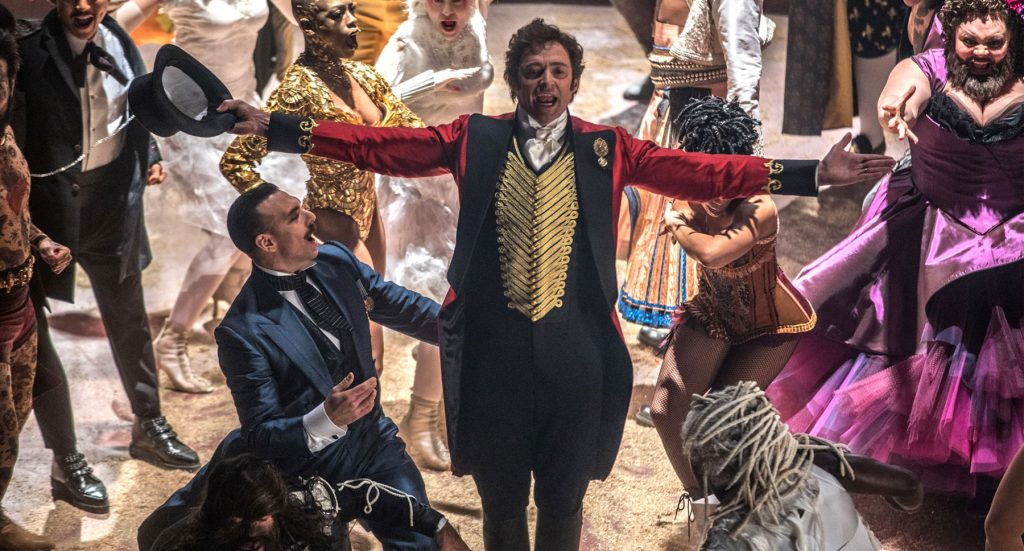 For Ashley, working on The Greatest Showman was truly a dream come true.

“I’ve always dreamed of doing an original film musical. Like West Side Story, and all the old MGM ones. I just absolutely love them. And I think in this day and age, to be able to do one on film is a dream come true.”

Ashley also credits classic films like Singin’ in the Rain and All That Jazz (along with other works of Bob Fosse) as inspiration for his work.

“My stuff, I try and really do a mixture of classic and contemporary. I try to marry the two together, like Janet [Jackson] and Jerome Robbins stuff in there!”

While Ashley is right that we don’t get as many originals musicals as we used to, the tide may be changing. With the success of 2016’s La La Land (which Benj Pasek and Justin Paul also wrote the songs for), and now The Greatest Showman, this is hopefully just the beginning.

“Yeah, keep them coming I say!”

Ashley did the choreography for a film coming out later this year called, “Finding Your Feet.” The characters in the film find dance later in life than usual.

“It was a really great experience. I had all these people that were around seventy, or eighty, doing all these big dance numbers. It comes out in February in the UK, and we just found out that it is being distributed in America – so that’s great!”

Outside of his work in film, you may have seen Ashley’s choreography for Kylie Minogue. The singer has a new album, so he is gearing up to work with her once again.

The Greatest Showman is currently playing in theaters everywhere.