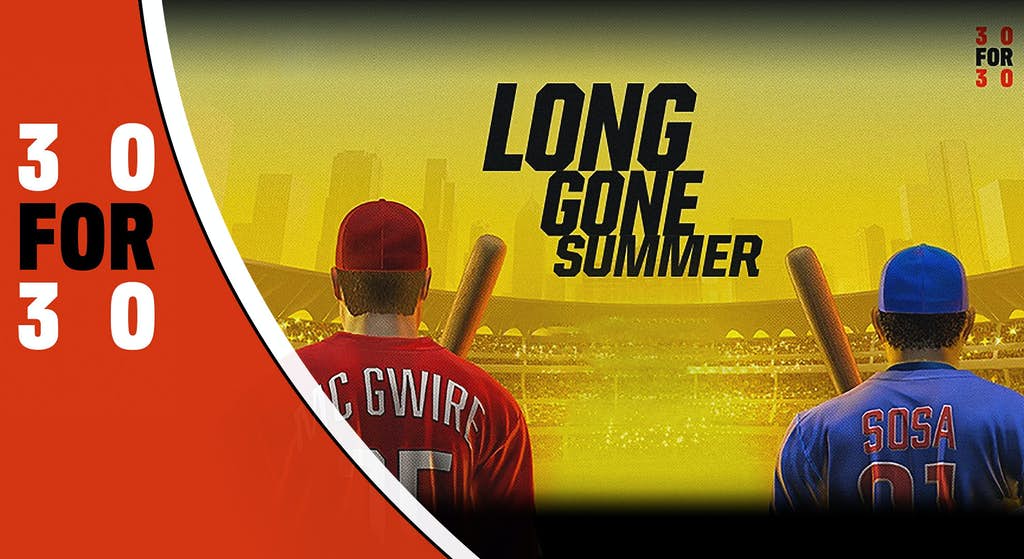 AJ Schnack may reside in Los Angeles these days, but the Edwardsville, Il. native and University of Missouri graduate showed off his Midwestern roots in Long Gone Summer, the new ESPN 30-For-30 film about the 1998 home run chase between Mark McGwire and Sammy Sosa.

The film was the culmination of a three-year process for Schnack, who was a journalism student at Mizzou. After speaking with ESPN about a different project, he pitched the idea.

“This had always been in the back of my mind, but I had assumed there was a reason it had not been done yet,” Schnack said. “After a few more conversations it became clear that no one had really been able to get everyone on the same page to do it. If I was able to go out and get the Cardinals and Cubs, along with Mark and Sammy on board with it, we’d be able to make it. That became about a year process.”

Schnack said there were a lot of conversations with McGwire and Sosa prior to filming.

“I think they wanted to understand where I was coming from and what kind of film I wanted to make,” he said. “At the time, neither of them were doing any long-form interviews. They had to think about if this was the right time to tell all those stories and eventually they got to a place where we could do it.”

Schnack does a brilliant job of taking the viewer back to the summer of 1998 in the film. Shots of local establishments in St. Louis and Chicago really help take the viewer back in time.

“You’re trying to evoke a feeling of what that summer felt like,” he said. “You try to use every tool you have to try to create a sense of what was going on during that summer.”

Throughout the film, fans can relive the chase from the very start of the season. There were several backstories going into the season of 1998, like McGwire and Ken Griffey Jr. being touted as the two likely to break the record that season. In Chicago, fans were prepping for another average season, but one without their beloved broadcaster Harry Carrey, who had passed away in the offseason.

One of the biggest undertakings of the film was going through all the footage of that season. Schnack not only had to go through Major League Baseball footage, but footage from ESPN, the 40 interviews he conducted and archival footage that continued to roll in.

“We had all these different games, footage from ESPN, footage from MLB and footage that we had shot as well,” he said. “One of the biggest challenges was that that the archive footage was constantly coming in. This was happening as recently as a couple months ago.”

Schnack had shown McGwire a cut of the film, but after some new material from McGwire’s days in Oakland came up, he had to go back into the film and re-edit a part.

Both men talk in detail about the home run race throughout the film. Schnack waits until the end of the film to address the controversy that followed surrounding performance enhancing drugs. Both men saw their images take a major hit following steroid allegations. McGwire has since come clean and been welcomed back by St. Louis fans and MLB. Sosa has never admitted guilt. Sosa has also never been back to Chicago, something that is pointed out in the film.

“I think Mark has talked openly about what he used and how it affected his performance. He was happy to be back around the game. Everyone had said he was an excellent coach,” Schnack said. “Sammy is pretty happy in a lot of aspects of his life, with is family and business interests. I think he would like to be reunited with Chicago at Wrigley. I think he was happy to be involved with a project that took people back to that moment in time and what it really felt like at the time. Hopefully it will happen sooner than later. It’s a situation whose time has come.”

Schnack was able to recruit Jeff Tweedy, who has St. Louis and Chicago ties to make film’s score. Watching McGwire’s 62nd as you hear Tweedy’s guitar riffs twanging quietly under the footage really adds a mystique to the entire moment.

Schnack talked about how important music is to his filmmaking process.

“Music is huge in terms of what it does in a film and how important of a piece it is to watching a film,” he said. “Some of my most creative moments in working on a film are when I’m working with a really great piece of music.”

Along with the haunting soundtrack, fans get a chance to hear Jack Buck and Mike Shannon call McGwire’s homers throughout the film. Shannon is actually interviewed in the movie.

“That was one of my intentions in the film,” Schnack said. “I can remember my dad asking me to ride around with him so we could listen to Mike Shannon and Jack Buck call the games. I used to come home from school in April and May and turn on WGN and listen to Harry Carey doing his thing. So, as a baseball fan I could identify with these voices. That was always going to be a big part of it.”

When asked what the home run chase meant to the game in 1998 and what it means now, Schnack offered his opinion.

“I’ll leave the debate on whether it saved baseball to other people, but I think what I know about that time period is when on 9-8-98 when Mark jumped into the stands and hugged the Maris family, America looked at that and said that’s our national pastime. That’s a reflection of all that is good,” he said. “That feeling lasted for several years. Now, one of the reasons I wanted to make the film is because it was kind of hard to remember that feeling because of what we know about the steroid era, as well as what we don’t know about it.”

Long Gone Summer is available on ESPN and ESPN+.