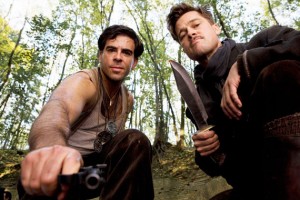 Quentin Tarantino scored his biggest release every over the weekend with his WWII action film, Inglorious Basterds. The film took domestically an estimated $37.6 million beating his previous best Kill Bill Vol. 2 which had an opening of $25.1. Inglorious Basterds did well over the expectations for it’s weekend opening, which most pundits set at around $25 million. At an average of $11, 880 per screen this is a great opening for a late August film.

Last week’s winner, District 9, had another great weekend grossing another $18.9 million bringing it’s domestic total to an estimated $73.9 million. Not bad for a production that cost less than $30 million to make.

In third for the week came the poorly reviewed G.I. Joe which seems to still be moving at a strong pace despite bad word of mouth against it. With marketing similar to the popular Transformers series, it is no doubt drawing people in who want a spectacle filled film. G.I. Joe definitely fills that gap for audiences.

The week had a few newcomers besides Inglorious Basterds. None of them performed very well, in fact most of them might be considered flops. The kids oriented Shorts was the second highest newcomer of the week making an estimated $6.6 million on the weekend. This gross was high enough for them to stay in the top 10, but overall it is a very disappointing start for a year that has so far been very good to kid oriented films. Part of this start might be due to the fact this film has not skewed as well with adult film goers. Previous kid’s films of the summer such as Up and Ice Age have kept the interest of adults as well as the children who are going to them.

The female oriented picture of the week comes from Post Grad which posted a disappointing $2.8 million dollars this weekend. The film which stars Alexis Bledel came in at the number 10 spot to round out this weeks top 10. The film which was geared towards women and a teen audience might have suffered due to the glut of female skewed movies out right now.

Overall, Box office business was up 26% compared to last year in the same timeframe. This is the third weekend in a row that business has been up. This year has seen a 7% increase over last year. With some strong releases down the stretch for the rest of the year, we could see a great box office year.