‘Transformers: Revenge of the Fallen’ comes to DVD and Blu-Ray on Oct. 20th 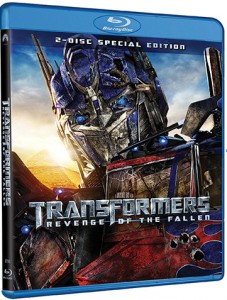 Paramount has released the details for the Transformers: Revenge of the Fallen DVD and Blu-Ray release set for October 20th.

HOLLYWOOD, CALIF. (August 20, 2009) – With more action and more thrills, TRANSFORMERS: Revenge of the Fallen captivated audiences to earn over $820 million at the box office and become the #1 movie of the year in North America and throughout the world. The latest spectacular adventure in the wildly popular TRANSFORMERS franchise will make its highly-anticipated DVD and Blu-ray debut on October 20, 2009 in immersive, two-disc Special Editions, as well as on a single disc DVD, from DreamWorks Pictures and Paramount Pictures in association with Hasbro; distributed by Paramount Home Entertainment. The eagerly-awaited home entertainment premiere will be accompanied by one of the division’s biggest marketing campaigns ever, generating awareness and excitement of galactic proportions.

From director Michael Bay and executive producer Steven Spielberg, in association with Hasbro, TRANSFORMERS: Revenge of the Fallen delivers non-stop action and fun in an all-new adventure that the whole family can enjoy. Featuring out-of-this-world heroes in the form of the mighty AUTOBOTS and a malevolent and powerful villain known as THE FALLEN, the film boasts some of the most sensational—and complex—visual effects in film history set against the backdrop of spectacular locations around the world. In addition to audience favorites OPTIMUS PRIME and BUMBLEBEE, the film’s human stars have returned to help save the world including Shia LaBeouf (Indiana Jones and the Kingdom of the Crystal Skull), Megan Fox (How to Lose Friends & Alienate People), Josh Duhamel (“ Las Vegas ”), Tyrese Gibson (Four Brothers) and John Turturro (The Good Shepherd).

The TRANSFORMERS: Revenge of the Fallen two-disc Blu-ray and DVD feature over three hours of in-depth, immersive special features that let viewers further explore the world of the legendary ROBOTS IN DISGUISE. Among the engrossing content is a multi-chapter documentary, including interviews with the cast and crew, that chronicles the entire making of the film from development and design to filming in locations around the globe, working with the U.S. military, creating the groundbreaking visual effects and putting it all together to produce the biggest film of the year. The discs also include an all-access featurette following renowned director Michael Bay through an entire day, a comprehensive exploration of the “confidential files” on a dozen of the TRANSFORMERS characters featured in the film, multi-angle breakdowns of some of the most sensational action sequences and much, much more.

The Blu-ray and two-disc DVD packages also will feature augmented reality technology that will allow owners to interact with a holographic image of OPTIMUS PRIME utilizing their webcams and a special website. Fans will be asked to piece together the Matrix of Leadership to bring OPTIMUS PRIME back to life, help repair his armor and calibrate his weapons by actually controlling his aim during target practice.

As an added bonus, the Blu-ray will include an exclusive interactive feature that gives viewers the ability to customize their own robot characters and get a glimpse at a rogue robot. Out of all the available permutations, one will unlock an exclusive interview with Michael Bay about his plans for the next adventure. 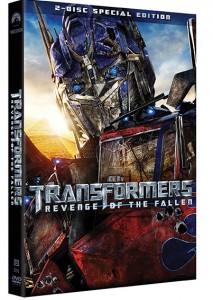