Hugh Jackman as ‘The Wolverine’ – Movie vs. The Comics by Frank Miller/Chris Claremont (Review) 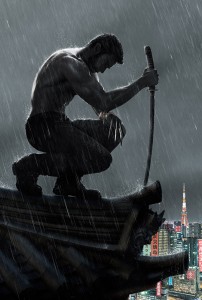 It is sad to think that a film about Wolverine, one of the most cherished and beloved comic book creations of all time, could leave such a bad taste in your mouth. Unfortunately that was the result 2009’s X-Men Origins – Wolverine, a poorly scripted, disjointed mess of a film. After enraging practically the entire X-Men and comic book fanbase with the atrocity, it was hard to imagine that we would ever see another standalone Wolverine movie – at least for a while. But with as bad as the film was, it still brought in $373 million dollars worldwide – spurring the announcement of a sequel shortly after its release.

The first trailer for The Wolverine was released to skeptical fans of the franchise in March of 2013. But what we saw was nothing like the movie that came before it. The trailer gave hope to comic and movie fans alike, and showed us what appeared to be the Wolverine that we wanted.

The film draws inspiration and takes many of its beats from the four issue 1982 Marvel Comics Limited Series by Frank Miller and Chris Claremont. Both take place in Japan, but the way Wolverine gets there is a bit different. In the movie, Logan (Hugh Jackman) has distanced himself from the X-Men after the events of The Last Stand. He lives in the woods, haunted by constant memories of Jean and what he had to do at the end of X3. Like in the comics, he finds a suffering bear that has been shot with an illegal poisonous arrow – and tracks down the hunters that are responsible. But before he can do what he does best, he is joined in the bar by Yukio (Rila Fukushima) who proves a force to be reckoned with. She tells Logan that her employer Mr. Yashida (Hal Yamanouchi) would like to thank him in person for saving his life long ago. This is the catalyst for his trip to Japan, rather than the undelivered letters and failed phone calls to Mariko in the books. 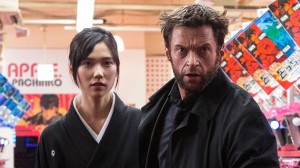 It is not long after arriving in Japan that Logan is introduced to Mariko (Tao Okamoto), who is the granddaughter of the man he saved. It is at the Yashida estate that he also meets Shingen (Hiroyuki Sanada), Mariko’s father. Since Logan and Mariko do not yet know each other, there is no confrontation with Shingen like in the comics. However you still get the impression that he is up to no good. After a private conversation with Yashida, Mariko runs out of the room crying. It is shortly after that he tells Logan the true purpose for his visit. Yashida is dying from cancer, and hopes to repay the gift of life that he was given by Logan so long ago. His company has found a way to transfer Wolverine’s mutant abilities to himself, therefore saving his life and leaving Logan mortal. He refuses the grandfather’s offer, and shortly afterward we see the old man being taken away on a stretcher.

Unlike the source material where Shingen has Wolverine poisoned, he was awoken from a nightmare where Viper (Svetlana Khodchenkova), who is Yashida’s oncologist, is standing over him breathing some sort of poisonous fumes into his lungs. Since there is no dying grandfather in the comic, after the funeral is where things kick into gear and start to sound a bit more familiar. It is there we are introduced to Noburo, who is Mariko’s fiancée rather than husband. He is also the minister of justice in the film, instead of Shingen’s assistant, but it is a thin line to walk as we will find out. It as at the funeral where we learn the effects of whatever the poison has done, when the Yakuza attack the family and kidnap Mariko, and Wolverine is strangely wounded in battle. Although he ends up rescuing Mariko, he is shot several times in the fight and finds that his healing abilities are gone. 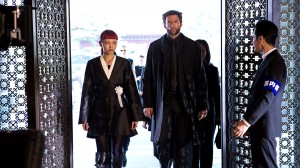 Yukio is Wolverine’s self-proclaimed “bodyguard” in the film, helping him fight while he is weakened. She does not appear infatuated with him as she does in the comics. We see Mariko and Logan together for most of the film, and that is where the relationship between the two is formed. Their story is an amalgamation of the Wolverine’s journey with Yukio, and his love for Mariko.

The film has a lot of substance, which is the complete opposite of the last film. The story is slow-burning, with plenty of character development and relationship building. Rather than packing it with non-stop action, Director James Mangold delivers concise and hard-hitting action dispersed throughout the well-written script. Thankfully the action sequences are leaps and bounds above what we saw in Origins.

One of the worst parts of X-Men Origins: Wolverine was the special effects. The CG was terrible, bordering on embarrassing, and the animation on Wolverine’s claws was downright laughable. More than once they appear to be floating above his hands, rather than protruding from his skin, as they bounce and shake due to terrible motion tracking. Luckily the effects in The Wolverine have gotten much better, with the exception of a few minor details. There is one scene in the very beginning of the film when Logan saves Yashida, where they are engulfed with flames which send him flying through the air. The effects were almost cringe-worthy, and had me worried for what was to come. Luckily that was the worst offense, along with a couple of times the claws still didn’t blend in quite right. Overall, a vast improvement of its predecessor.

Although I am not a fan or proponent of 3D, it is actually handled quite well in the film. It adds a good amount of depth, while rarely coming off obnoxious with cheap pop-outs from the screen. 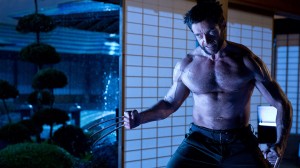 Hugh Jackman was never the problem in Origins, nor was he in The Last Stand. This marks his sixth film as Wolverine (counting his incredible cameo in First Class), and the actor is as great as ever. Jackman has gone on record stating that he knows they messed up with the last film. And I think it spurred him to give it everything he’s got in The Wolverine. At this point, I honestly can’t imagine another actor in the role. Jackman owns the character, only further wetting our appetites for what is to come in Days of Future Past in 2014. We see a different side of the character in this film, as he is more vulnerable due to the loss of his abilities. Jackman really gets to show us his range that he is known for outside of the series.

The Wolverine is not only the movie we needed; it’s the movie we deserved. After X-Men Origins: Wolverine, I had lost my faith in another standalone film for the character, which is unfortunate. After hearing that a sequel was green-lit soon after the release of the previous film, I anticipated more of the same. Thankfully that is not even close to what we received. Almost everything they failed at in the last film was corrected in this one, and so much was done right. The audience actually cares about the characters, and connects with their stories – at no compromise to the action. Jackman and the creatives make things right with this one, and I can honestly say that I’m ready to see some more Wolverine.

The Wolverine is a B+

P.S. By now we are pretty much trained to stay until the end of the credits – especially when it comes to superhero movies. Make sure to stick around for a great tie to Days of Future Past!