How Well Do You Know the Oscars?

Test your skills with Oscar Bingo! 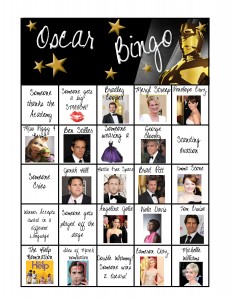 So you consider yourself a fan – no, a savant of the entertainment industry. You know who’s who and who’s played what, and you know better than anyone what’s going to happen at this year’s Academy Awards because you’ve seen them all. You know what today’s celebrities are like and you know who’s been nominated and who’s likely to win, what they’re likely to say, and what they’re likely to do. How exactly do you put this knowledge to the test?

It’s simple – play a game of Oscar Bingo. Bingo isn’t just a game for derelict gaming halls, as Free Bingo Hunter even reveals that some of today’s online bingo portals reward players for pulling all-nighters – perfect for us movie junkies who love nothing more than watching movie marathons. NJ.com turned the game into a fun little activity to do on the side last year when they released their Oscar Bingo cards. Running on any browser, players could load up the card on their iPads or phones and then just tap to mark off a box on the card once the conditions had been fulfilled. It was a great game that was unexpectedly fun.

Now, we could wait for them to release a new set of cards for this year, or we could make things more fun by creating our own bingo cards. It’s easy and pretty fuss-free, really. All you need to do is print out blank bingo card templates from Print-Bingo.com, and hand one card each to your guests as soon as they arrive at your house to watch the ceremony. Have them fill out the cards with their own predictions of things that will happen in the Oscars. These can be anything from who’ll win which award, to what your favorite actress will be wearing, to the things that winners will be saying in their speeches. As the ceremony goes on, mark off the boxes as their predictions come true one by one, and the first to complete a bingo pattern wins.

You could also make things a bit more difficult by assigning points to each of the boxes, so that those who get the most number of predictions right wins the game. What do they win? It’s up to you. Maybe give the winner free movie tickets, or a DIY Oscar. Have fun putting your Oscar knowledge to the test!