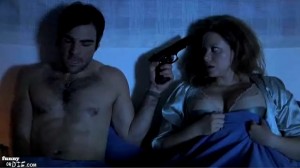 A hostage and a hostage-taker get dangerously close to one another.

Check out this awesome new exclusive short film from Funny or Die. Zachary Quino plays a robber that takes a hostage when a hold-up goes wrong. He then pretty much carries on a relationship with his hostage, and dating her while holding her at gunpoint. This is brialliant, and Zachary Quinto is awesome! (Sidenote: Heroes starts in a few weeks!)