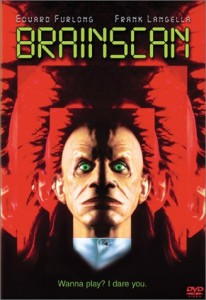 In Brainscan, Michael (Edward Furlong), a computer savvy high school student, has it rough. He survived a car accident his mom died in, his dad is a workaholic, his Horror Club at school gets banned, and he mopes while drooling over (and videotaping) the girl next door (Amy Hargreaves). His best bud, or make that buddy forever; Kyle (James Marsh) bugs him to check out this sick new game, Brainscan. A heavily skeptical Michael gets the game and it soon consumes his life. Now Michael can’t tell reality from fiction and a cop (Frank Langella) is hot on his trail for a murder he didn’t commit, or did he? Oh, he’s also being tormented by metal mascot reject, and creator(?) of the game, The Trickster (T. Ryder Smith).

The 1990’s are usually looked at as a bleak period for horror films. There are a few standouts from Candyman, The Frighteners, Dellamorte Dellamore (Cemetery Man), and Scream (even though I’m not a fan) to lesser seen films like The Last Broadcast. But, by and large, the 90’s is a cesspool of forgettable and unmemorable films. I guess I was hoping Brainscan might be a diamond in the rough. I was wrong, Brainscan is definitely a stinker. Hot off Terminator 2 and Pet Sematary 2, Edward Furlong tries to carry a movie and fails. About 36 minutes I realized his character was limping and it took another 10 to realize it was because of the accident alluded to earlier in the film. To be fair, I’d had a few cocktails. Frank Langella, who I remember best as Skeletor from Masters of the Universe and an all around class act, is given little to do. The “twist” ending is dumb and the final scene makes no sense. But there were a few things that made me take notice.

First of all, Brainscan was the first film written by Andrew Kevin Walker, the man behind Se7en and Sleepy Hollow. He gives no sign here that he’ll become an in demand writer. The annoying T. Ryder Smith has gone on to voice Baron Underbheit on Venture Brothers. The music was done by George S. Clinton who has scored countless films among them American Ninja 2 and 3, Mortal Kombat, and Austin Powers. And the soundtrack is damn good for such a forgettable film. White Zombie, Primus, Butthole Surfers, and Mudhoney all contribute songs. Is this a movie I would suggest for the night? No, sometimes movies aren’t talked about for good reasons.