HD Trailer For “The Chronicles of Narnia: The Voyage of the Dawn Treader” 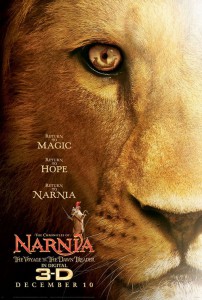 The first ‘Narnia’ film in the new franchise, “The Lion, The Witch, and The Wardrobe” made over $745 million dollars worldwide, with a budget of under $200 million. The sequel, “Prince Caspian,” had a budget of around $225 million. But it dropped to only around $419.6 million worldwide. While the film didn’t make as much money as the first one, we are still talking about a profit of close to $200 million dollars – and that is just in the international box office. That’s not to mention DVDs, Blu-ray, merchandise, and whatever else they sold because of it.

The drop at the box office was enough to get Buena Vista (Disney) to drop the rights. Luckily Fox was there to pick up the pieces, and hopefully revive the series for the complete seven films originally hoped for. “The Voyage of the Dawn Treader” is the newest film in the series, that is set to release in December of this year. In the film,

Lucy and Edmund Pevensie return to Narnia with their cousin Eustace where they meet up with Prince Caspian for a trip across the sea aboard the royal ship The Dawn Treader.

Watch the HD Trailer for “The Chronicles of Narnia: The Voyage of the Dawn Treader” below:
[hdplay id=112 width=590 height=375]