‘Harry Potter 7: Part 1’ Not Going to Be Ruined By 3D Gimmicks 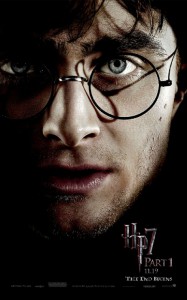 There are two more ‘Harry Potter’ films left in the series, both of which are being split from the seventh book in the series. On Friday, Warner Bros announced that “Harry Potter and the Deathly Hallows: Part 1′ will not be converted to 3D. Lately in Hollywood, there has been a craze to bastardize many films by converting them to 3D – creating a gimmick that allows theaters to charge an extra $3 dollars per ticket sold.

First of all, let’s make sure we are all on the same page. 3D movies are NOT a bad thing. The technology is terrific, and the theater-going experience can be a great one. There are many movies that were created in 3D that look amazing on the big screen. But the keyword is “created.” Warner brothers even said, “Despite everyone’s best efforts, we were unable to convert the film in its entirety and meet the highest standards of quality.” In summary – they tried, and it probably looked terrible.

“Avatar” was filmed with state-of-the-art 3D cameras, and looked incredible. It was groundbreaking technology that is surely going to pave the way for future films that are created for 3D viewing. But on the other side of the spectrum, Warner Brother’s “Clash of the Titans” was converted to 3D in post production, and looked awful. It was distracting during the entire film, and cheapened the entire move as a whole. It took a movie that might have otherwise been at least entertaining, and made it ridiculous. Case in point – don’t take a good movie and convert it into 3D to create a marketing gimmick and make a few extra bucks.

In my opinion, the ‘Harry Potter’ films have gotten better and better each time they are released. There really isn’t a bad film in the series, and they keep becoming more serious pieces of film. But I would hate to see that ruined, or at least tarnished, by the next movie trying to take advantage of the 3D craze. Let’s just hope WB can stay away from 3D for the next couple of movies, and not give us anything to worry about.

What do you think about the last two ‘Harry Potter’ films being converted to 3D? Should they, or should they not? Leave a comment below!