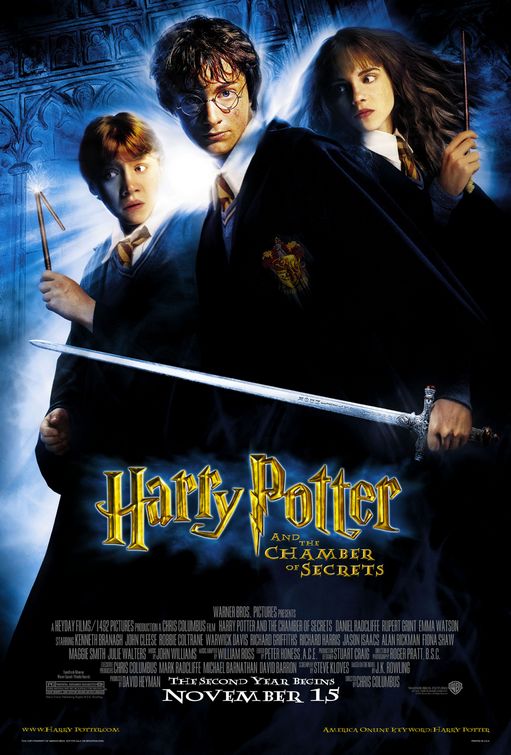 First, a bit of a confession. I was not always a fan of the Potter series, in fact I would tell anyone who listened that I thought it was stupid. I was an ignorant teenager at the time who just happened to be a little older than the trend. I was big into my fancy literature and more grown up stories. I was asked to go to this film by a girl I really liked at the time, so of course I said yes. Unfortunately, the film did nothing to change my opinion. I wasn’t really into it from the start, and I had my mind set already. I did remember enjoying a few parts, but overall the story felt a bit childish. It wasn’t until right before the the fifth novel came out, Harry Potter and the Order of the Phoenix came out that I gave it a try. I ended up reading the first five books in less than a week. I was hooked.  This film is the only one I had seen prior to reading the books. Due to that I am probably a little harsher on this one than I am on the others? Why, because I didn’t have the full source material in my head. I didn’t realize what a wonderful story it was. I had nothing to judge it on but it’s own merits. Do I think it better than I did my first time around? Oh, for sure. The next time I watched it, I kept an open mind and enjoyed it much more. It does have it’s flaws though unfortunately…

Harry Potter and the Chamber of Secrets is the second installment chronicling Harry Potter’s second year at Hogwarts. Hogwarts is even more of a dangerous place this time around. Harry is forewarned by a tiny house-elf named Dobby that he must not go back to Hogwarts or risk great danger upon himself. Harry comes back to school only to find the mysterious Chamber of Secrets has been opened. To make matters worse Hogwarts has a new Defense Against the Dark Arts teacher who knows nothing more than how to preen and primp himself into physical perfection (or what he believes himself to be). Harry is also hearing voices, which even in the wizarding world is not a good thing.

Chamber of Secrets is a great continuation of the Harry Potter series. It is still aimed at a younger audience than the current films play towards, but it definitely moves the tone a bit darker with talk of a student who was murdered the last time the Chamber was opened. Harry continues to build stronger relationships with his two closest friends, Hermione Granger and Ron Weasley. Chamber of Secrets also adds a new character that we have yet to see in any of the other movies, but is in a good portion of both Goblet of Fire and Order of the Phoenix, Dobby the house-elf.  The biggest problem with Dobby is not the effects, he looks just as how he is described in the books, but how he is played. Maybe it is a little easier to imagine such a fantastical creature without seeming over the top in your imagination. On screen though he plays somewhat similar to JarJar Binks in Star Wars: The Phantom Menance. Don’t get me wrong he is a lot more tolerable than the aforementioned character, but at times not by much. In the books Dobby is a frustrating at times, but overall an endearing character who you almost pity. There are a few select scenes in the books that play out the character much better and makes us lend our sympathy to him a bit. This is probably the biggest miss in the film. Dobby is one of the core characters to the story, and if you don’t nail him right, you don’t have the story. 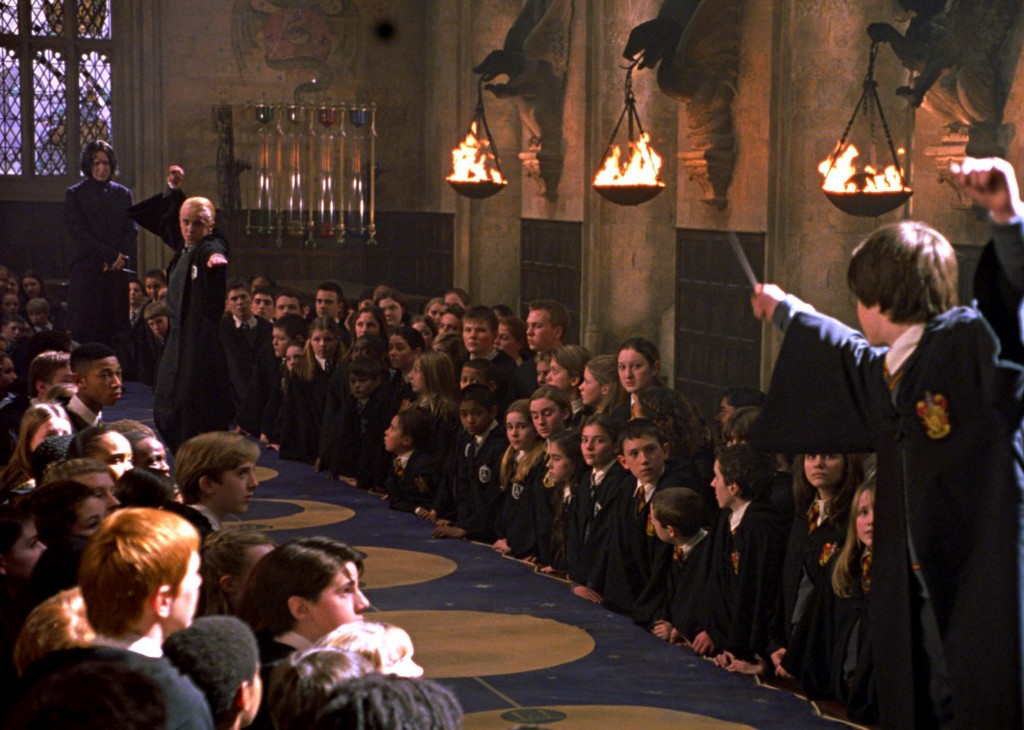 This is yet another film that leaves much intact from the book including a lot of the dialogue. Sure certain scenes like Nearly Headless Nick’s Death Day party are left out, but it is a non-essential for the story. Sure, it’s fun, but overall it moves the story in no new direction. What is missed is a lot of the heart from the books. Once again you can tell they were trying to stay faithful, but left a lot of the themes with them. The emotions lie flat or just feel wrong in certain scenes. If you are going to pay such close attention to the books don’t stop with the elaborate sets and the consistent dialogue, but remember the emotions that Rowling gives the characters, because in the end those are the most important ideas to the story.

Casting is once again great here. With the addition of the new Defense Against the Dark Arts teacher, Gilderoy Lockhart played by Kenneth Branagh, things are spiced up a bit. Branagh obviously read up on his character. He captures his vapidness and flighty sensibilities dead on. Flashing his toothy grin at us during every scene he is in, giving probably the best comic relief of the series up until that point. We meet a new mainstay in the cast of villains in this one, Lucious Malfoy. As much of a pain in the ass as his son, he is played brilliantly by Jason Issacs. It is very great to see two completely different characters who overall have very similar motives played so differently. Both have ambition, but ones pride is his vanity, the other his power. Voldermort might be the main villain in the story, but his henchmen give a brutal face to the wide reach he has, and the power over people he controls. The holdovers in the cast continue to grow in their characters. It is great to watch each one of these films in a row just to see how far along these child actors become with each film.

Visuals are much better in this one.  After the huge gross of the first film, Warner Brothers no doubt put a lot more money into the production of this film, and it shows. The film is lit a little less brightly giving us a more ominous tone than the previous film. The special effects are what improve most of all . The big beautiful sets mixed in with a little green screen and CGI goes a lot further in this one. The final fight scene seems much more realistic and a lot more intense.

Overall, Chamber of Secrets is another fine adaptation, but I still think it could have been done better. No doubt fans will love it, but if you are new to Harry Potter it might make you wonder what all the fuss is about.

Harry Potter and the Chamber of Secrets gets a B-. 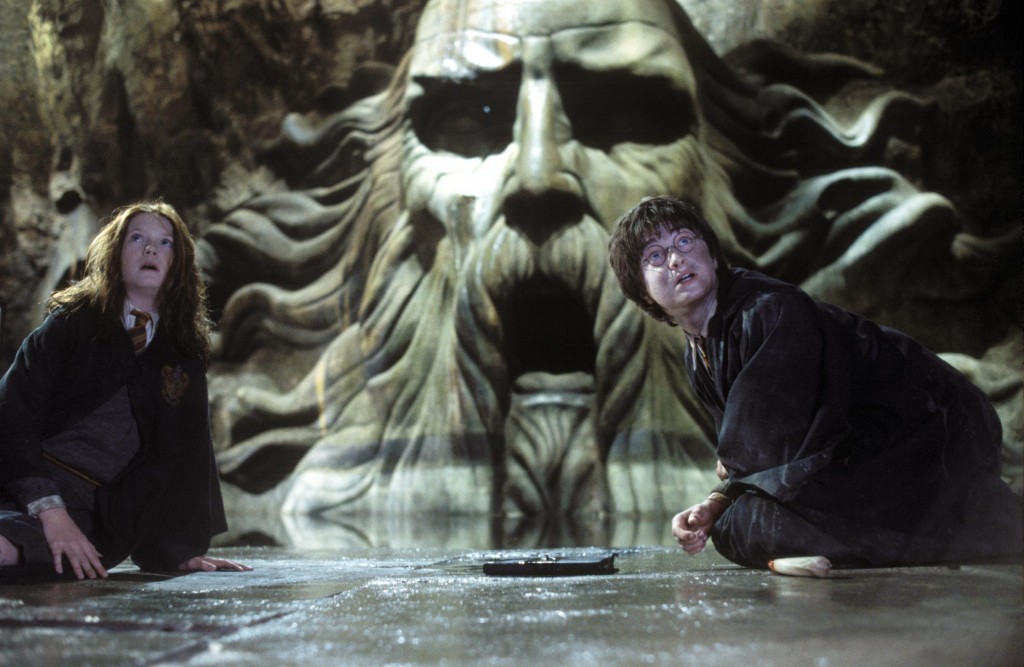