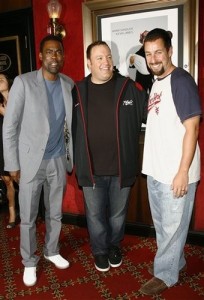 This feels like an early 90s reunion of SNL, with the exception of Kevin James. It is hard to believe that Rock and Sandler once worked together on the popular sketch show, and even harder to believe they were let go. Now, both Rock and Sandler are two of the biggest names in comedy. Spade and Schneider, while funny at times really are second tier when compared to their co-stars, but I really hope they put them on level playing ground. When you get an ensemble cast like this together you have to hope for some comedic sparks. All of these guys have proved they were funny once upon a time. Now hopefully they can show us why they were so popular.

Thirty years after graduating high school, five former basketball teammates gather at the lake house where they celebrated their biggest victory to mourn the passing of their late coach. Over the course of the Fourth of July weekend, the five friends realize that just because they’ve all grown up and started families doesn’t mean that they’ve lost that old spark. Adulthood is what you make of it, and no one at the lake house is eager to be the grown up of the gang. Adam Sandler, Chris Rock, Kevin James, David Spade, and Rob Schneider star in a film written by Sandler and Fred Wolf, and directed by Dennis Dugan (I Now Pronounce You Chuck and Larry, You Don’t Mess with the Zohan). Maria Bello, Salma Hayek, and Maya Rudolph co-star. ~ Jason Buchanan, All Movie Guide