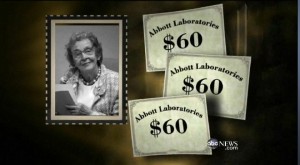 In an economy where job loss is running rampant, and putting food on the table has become the priority, charitable donations are severly down. This makes the act of one person that donated their entire wealth to Lake Forest College even more-so refreshing than ever.

Grace Groner of Lake Forest, Chicago purchased $180 in stock for Abbott in 1935, which split multiple times and were reinvested. In a little over 70 years, and with a lot of patience, Grace’s investment turned into a fortune – $7 million dollars! What’s even more amazing is that she donated every penny to Forest Lake College – the school which she graduated from in 1931.

Grace was the type of person that did not care about material objects. She did not need the biggest house. She did not care about the fastest car. And she never worried about throwing extravagant parties or buying fancy clothes. Grace was the type of person that valued people and friendships more than anything. That is how Grace lived her entire life, up until she passed away in January of this year – at the age of 100.

William Marlatt, Graces attorney and friend said, “She did not have the needs that other people have… She could have lived in any house in Lake Forest but she chose not to… She enjoyed other people, and every friend she had was a friend for who she was. They weren’t friends for what she had.”

The money will go to fund internships and study-abroad programs for the students of Lake Forest College. Read more about this incredible story at the Chicago Tribune.