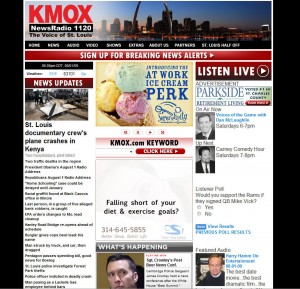 A St. Louis man has been injured in a plane crash in Kenya, east Africa. 25-year-old Dan Parris of Chesterfield was pulled from the flaming wreckage by another St. Louisan, 26-year-old Rob Lehr of Ballwin. The two were aboard a plane used in their work in Kenya. Parris reportedly sustained some broken bones and burns on the lower part of his body. The two had been in Africa shooting a documentary on poverty there. Reports from the scene indicate the plane went down just outside Wilson Airport in Nairobi around 2:30pm Kenya time Saturday afternoon after striking power lines and then slamming into a high-rise building. One of the pilots died in the wreckage. Lehr managed to rescue the other pilot along with Parris, who is now in treatment in hospital in Nairobi. (photo: Nation newspaper in Nairobi, William Oeri)