It’s a sport that will never gain the fame or notoriety of the four major sports.

The men and women who play roller-derby practice and scrimmage in tiny venues that can barely squeeze in a full team on the benches.

The competitors aren’t super-famous or inaccessible. They don’t do it for the fame; actually, the participants are better known by their derby pseudonyms. Some are clever plays on their name, while some are just outright hilarious. They certainly don’t do it for the money; the athletes don’t get paid, and in fact they have to pay dues for practice time.

So what do they do it for?

If you’ve never been to a derby bout, it might seem pretty foreign to begin with. “I think it’s intimidating for anyone that doesn’t understand it,” says Alex Baisch, better known in the rink as High Pains Drifter. The 32-year-old Baisch, a native of Edwardsville, first started out as a ref for the Arch Rival Roller Girls, a female St. Louis-based entry in the world of roller-derby.

At first it might just seem like a pack of people skating around in a circle with refs randomly blowing whistles, but the concept is actually pretty simple. Each team has a max of five players participating at any time; four of these skaters are blockers, while one blocker is designated the pivot. The fifth skater, the jammer, is the point-scorer for the team. His/her job is to skate past the other team’s skaters; every time he/she does so, a point is awarded. Conversely, the blockers try to prevent the other team’s jammer from getting through, while the pivot attempts to set the pace of the pack. 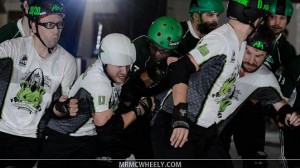 The two teams start in identical positions, and the first jammer to break through becomes lead jammer, gaining the ability to stop each round by putting their hands on their hips. This is a pretty important advantage to have, as it can prevent the other team from scoring too many points. Once a round ends, there’s a 30-second period to re-group and change out skaters and start again. Each bout consists of two 30-minute halves.

Sounds pretty simple, right? I thought so, too, but when you watch the bout, you realize just how much coaching and strategy’s involved in the game. Teams alter their starting positioning and coordinate with each other during the round in an effort to block the other team’s jammer. They slow the pace. They quicken the pace. The lead jammer constantly purveys the situation so he/she knows when to call the round.

“It’s super strategic,” Jim Barnthouse (Zombie Jesus) proudly proclaims. “There’s a lot more strategy than people are aware of.” Barnthouse, 35, emigrated from Chicago about three years ago. After seeing a women’s bout, Jim became interested in the sport and eventually began e-mailing the head of the Gatekeepers; after a few exchanges, he began training with the team. “I played hockey in high school, so that helped [with the skating]…but it takes a few weeks to pick up” the rules and strategy, he admits.

Indeed, there are a lot of things to pick up when first starting out. One of the first things that immediately sticks out is how much physical contact is present in the game. Jessica Hamm, who’s been working as an official in roller-derby since 2009 and the Gatekeepers since 2011, was incredibly helpful in explaining the rules to me. She pointed out the parts of a body that can be used to block: the chest, the thigh, the hip, the upper arm. If there’s a block involving another part, for example the back, a penalty is incurred.

Make no mistake about it, though; roller-derby has its fair share of big hits. While I was watching a scrimmage the Race City Rebels, several skaters got laid out, and in fact one skater ended up being helped off the rink after he landed on his shoulder. It may not have the physical contact of football, but it still gets pretty intense.

“There’s no down time,” Scott Meyer (Magnum P.I.M.P.) proclaims proudly. “It’s very physical and engaging.” Meyer helped found the Gatekeepers in 2009 and has been involved in roller-derby since 2006, when he started out as a referee. Meyer, like myself, is a DeSmet grad (class of 1999) and is the team captain.

Chances are if you walked by a starter for the Cardinals, Rams, or Blues, you’d have a good chance of recognizing them. You could walk by someone on one of the best roller-derby teams in America and chances are you wouldn’t realize it. 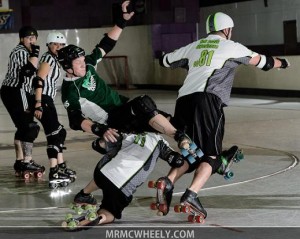 The action can get pretty intense as the bouts escalate. (Photo courtesy of Bob Dunnell – mrmcwheely.com)

These guys don’t get rich from the sport; the fact that they pay to play means they must have other means of income. Each person has a different income, a different background, a different reason for getting into roller-derby: Meyer was introduced to the sport by his father; Barnthouse through online resources.

Once they get on the rink, they are one entity. “It’s all about the camaraderie,” Barnthouse says. Three nights a week, the Gatekeepers rent out the Skatium in South City and work on their tactics; when they’re not practicing together, they’re working out together. It’s an overused term, I know, but these guys do shed their blood and sweat together. They revel in each other’s joys; they mourn together in misery.

This isn’t restricted to team limits; even opposing teams are often friendly with each other. During the scrimmage against the Rebels, the teams were often talking and even encouraging each other. Although they’re not on the same team, they also recognize that the more success teams have, the better it is for their still-nascent sport.

Of course, that doesn’t mean there aren’t rivalries and the desire to win.  The Gatekeepers have a rivalry going with one of the more successful associations in roller-derby, the New York Shock Exchange. Although the Gatekeepers hold the edge in the series 2-1, it was pretty obvious talking to them that the two teams take pleasure in defeating each other.

The Gatekeepers finished the regular season ranked second in the nation, behind Your Mom.

No, don’t be insulted. That’s actually the team’s name. Based in Des Moines, Your Mom came into town last weekend for the final bout. Admittedly short-handed due to injury, Des Moines left town thoroughly subdued after the match. Although the rankings won’t change in time for the championships, the #2 Gatekeepers were able to manhandle Your Mom easily(!), 330-78.

Even when the championships are done, the Gatekeepers know their work is far from done. One of their main objectives is to spread word around to get people not only to attend their bouts, but to participate. The Gatekeepers have information about starting up on their website, and they’ll openly talk about it to anyone willing to listen. While it may seem intimidating to start up, Baisch insists the pace at which a beginner learns is entirely up to the skater: “We’ve had people take two months before contact [the Gatekeepers won’t allow a skater to encounter contact during practice until he exhibits full knowledge of the safety and participation rules], we’ve had people get it in two months. It’s really all up to the individual.”

It certainly isn’t the easiest task for them, but these guys are determined to get the sport going. “It’s addicting; it’s a lot of fun,” Barnthouse says adamantly.

I look to Baisch, who nods.

Note: for much of the bout against Race City, I sat with the trainer for Race City, who answered several of my questions, but I failed to get his name. I’m indebted to him for his patience and willingness to answer my questions.

To find out more about the St. Louis Gatekeepers, click here.

To find out more about the Men’s Roller Derby Association, click here.