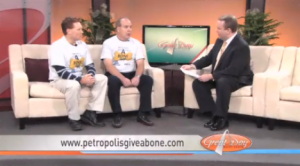 ReviewSTL.com has teamed up with Petropolis and KMOX to put on the first annual “Give a Dog a Bone” fundraising event.

This weekend, Radio Personality Kevin Wheeler from KMOX will be hosting the “Kevin Wheeler NCAA 2009 Video Game Playoff” at Petropolis. Registration is only $20 per contestant, and the top 8 spots win prizes! There will be inexpensive food for sale, and all proceeds go to Animal Rescue groups! It should be a great time, so come down to Petropolis on December 13th from 3:00 p.m. until 6:00 p.m.!

Details and registration can be found at the bottom of the page, or visit www.petropolisgiveabone.com. COME PLAY NCAA 2009 AND HELP RAISE MONEY FOR RESCUES!
Food will be sold for Cheap! All Proceeds go to Area Rescues!!