Get ready for 24 hours of straight gaming to benefit the Wounded Warrior Project. 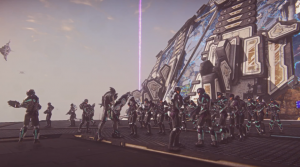 Bottomline Gaming is a community of serious gamers founded in January 2011. Their members are getting ready to play games like World of Warcraft, Guild Wars 2, Rift, and Planetside 2 – all for 24 straight hours. They call the event “GamePocalypse.”

The goal for GamePocalypse 2013 is to raise $50,000 dollars to support US troops through the Wounded Warrior Project. WWP serves veterans and service members who incurred a physical or mental injury, illness, or wound, co-incident to their military service on or after September 11, 2001 and their families. As of 11:50pm CT before the event, $2,740 of the $50,000 has already been raised.

Azure Twilight, one of the Planetside 2 outfits participating in GamePocalypse 2013, will broadcast a live multicast stream of the 24 hour event on their TwitchTV channel. From their site:

The stream will be of multiple players, across all the games being played, and will be hosted for the entire 24-hour event. The broadcast will highlight different players, views, and perspectives of the events as well as general gameplay. The broadcast will switch between multiple streamers much like a sports broadcast.

Here is a brief video explaining the event, and the soldiers who benefit from it:

The official website for GamePocalypse 2013 can be found at bottomlineguild.net. For more information about the Wounded Warrior Project, visit woundedwarriorproject.org.

Don’t forget to watch the live stream here, and donate to GamePocalypse and support the Wounded Warrior Project here.