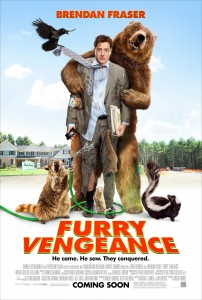 Was there really a time when Brendan Fraser was on track to be this generation’s Harrison Ford? As the star of The Mummy franchise it would seem so. However, a closer look at his resume reveals The Mummy films to be something of anomaly. In fact, when you notice a plethora of films like Dudley Do-Right, Looney Tunes: Back in Action, George of the Jungle and his latest Furry Vengeance, it would appear that his career trajectory is more akin to that of Dean Jones, star of such Disney favorites as The Love Bug, The Ugly Dachshund and The Horse in the Gray Flannel Suit. This time out Fraser plays Dan Sanders, a real estate developer tasked with clear cutting a forest to make way for a new upscale subdivision. But the woodland creatures that inhabit this particular patch of pristine wilderness have other ideas. Lead by a wily raccoon the crafty critters create devices of Rube Goldbergian proportions in an attempt to thwart construction. Pretty impressive for not having opposable thumbs.

So where to start? There’s so much gone wrong here. Let’s start with the poorly CGI’d animals. Thankfully they don’t speak. But they do communicate via sight-gag filled thought balloons. Amazingly, it’s even less funny than it sounds. Granted, the film is aimed at the under 7 set but even so it’s remarkably juvenile. Virtually every “comedic” moment involves Fraser getting peed on, pooped on, sprayed by skunks, hit in the crotch or all four of those things. It’s almost enough to make someone feel sorry for the actor…if he weren’t also listed as the film’s Executive Producer.

The film’s characters have an annoying trait of stating the obvious. Like when we first see Fraser step onto the front porch of the subdivision’s model home. He inhales the fresh air and says, “Nature.” As if all the trees didn’t tip us off. Or when we see Fraser’s predecessor say, “I do as I please” while throwing his still lit cigar out of his car window. Yes, we get it. You’re an amoral corporate fat cat. You don’t need to insult our intelligence on top of it. So when Amber, a local teenager opposed to the development, exclaims, “Some people will do anything for a dollar” it’s difficult to tell whether she’s speaking to the characters or the cast.

The overarching theme of eco-sensitivity is so ham-handed that parents might find their children intentionally increasing their carbon footprint out of sheer obstinance. The film is a message wrapped in a moral inside a lesson – nature good/business bad. Granted, it’s difficult to build a kids film around the notion of rooting for a real estate developer. However, given that much of the movie’s intended audience is no doubt being raised in homes that don’t look drastically different from the ones being built, the message of the film seems designed more to create anxiety in the kids smart enough to connect the dots.