Furcal to Have Tommy John; Where do the Cardinals Go From Here?

In a move that’s come as an absolute surprise to nobody, Cardinals shortstop Rafael Furcal has elected to undergo Tommy John surgery (for the uninitiated, TJ is ligament replacement surgery in the elbow), meaning he will miss the 2013 season. Furcal felt a pop making a throw in a game against the Nationals on August 30 last season and elected against surgery at that point, opting for aggressive rehab. The Cardinals tried to track his progress in the off-season, and Furcal made a single appearance in a B-team game this spring before he sought a second opinion for his balky arm. 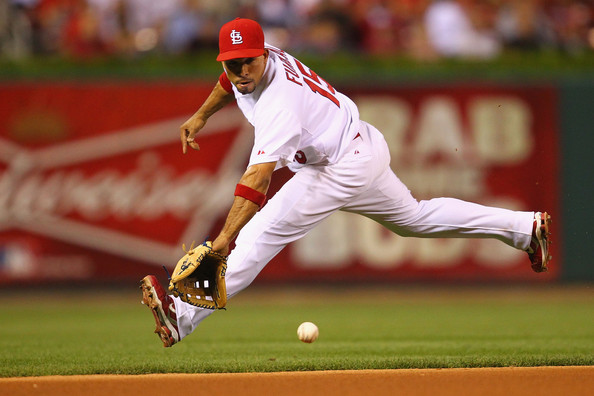 Furcal was traded to the Cardinals back in 2011 from the Dodgers in exchange for Alex Castellanos to provide a bit of stability to the shortstop position, a job he did marvelously well. He injected a bit of pop into the lineup (7 HR in just 50 games) as the Cardinals won the World Series and was an All-Star last year due to a strong first half (through May, he was batting .333) before he faltered down the stretch. Regardless of how his rehab goes, his career with the Cardinals could well be over. The team signed him to a two-year deal after the 2011 season, but he’ll be 36 by next season, and the Cardinals HAVE to look for a long-term solution to shortstop.