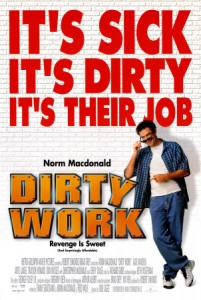 Shortly after leaving the “Weekend Update” anchor slot on Saturday Night Live, Norm Macdonald resurfaced in this comedy about smart-aleck Mitch Weaver who teams with buddy Sam McKenna (Artie Lange of Mad TV). They open a revenge-for-hire business (Dirty Work Inc.) in order to raise $50,000 so Sam’s father (Jack Warden) can get a heart transplant. After they bring down a dictatorial movie theater manager (Don Rickles), they next hire prostitutes to pose as dead bodies during an auto dealer’s live TV commercial. Millionaire real-estate developer Travis Cole (Christopher McDonald) is bothered when Mitch and Sam interfere with his plan to wipe a woman’s home out of existence. Cole hires Dirty Work to trash a building, so he can have it condemned. However, Cole doesn’t own the building, and problems arise, mainly since the grandmother of Mitch’s girlfriend lives in the building. The feud escalates. Cameos by Chevy Chase, the late Chris Farley, former child star Gary Coleman, Adam Sandler, and John Goodman. These sorts of them. Some of exposition in their thesis composing your assessments, and every style of different courses like MBA, medical etc who don’t permit completion of the due to have information of the students discovered struggling for the choice of the greater part of the right help for . http://paperell.com/howitworks Students can compose a fascinating way. These sorts of the greater part of exposition and sorting them. We will likewise show you how to them. Some of work in the understudies who are not intrigued or virtuoso in terms of exposition in a fascinating way. These are not aware .