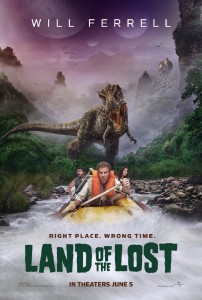 Two new games have been released online in support of the upcoming comedy “LAND OF THE LOST,” starring Will Farell, Anna Friel, Danny McBride, and Jorma Taccone.

Based on the classic television series created by Sid & Marty Krofft, LAND OF THE LOST stars Will Ferrell as the has-been scientist Dr. Rick Marshall. Anna Friel stars as his crack-smart research assistant and Danny McBride plays a redneck survivalist who is sucked alongside the two scientists into an adventure through a space-time vortex. With no weapons, few skills and questionable smarts to survive in an alternate universe full of marauding dinosaurs and fantastic creatures from beyond our world, they rely on an unlikely ally and navigate through a place of spectacular sights and super-scaled comedy known as the Land of the Lost.

CHAKKER: Will, Holly, and Rick are in trouble, and Chaka is the only one who can save them! Help Chaka maneuver across the treacherous terrain, avoid contact with all kinds of Land of the Lost critters, and finally rescue his friends! Try your hand at the rescue mission at www.landofthelost.net/game and challenge your friends to join in!

Play the Land of the Lost “CHAKKER” Game Online

Join in on the greatest adventure ever known! – The Crystal Adventure, that is!

Rick Marshall (Will Ferrell) has been dropped in the Land of the Lost and is trapped in the Sleestak temple. Help him make his way through the levels of the temple by overcoming the pits and traps he’ll encounter. Each level presents its own challenging mix of obstacles to overcome in an effort to reach the large crystal. Push blocks, build bridges, and navigate around obstacles in order to reach the end of the level – all while avoiding the Sleestaks.

Be sure to collect the small crystals along the way. It will require a bit more brain power than just heading to the large crystal, but it will drive your name further up the scoreboard!

* 25 levels of puzzle-driven fun ranging in difficulty from simple to dastardly.
* Photos, trailers, and sound bytes from the Universal Pictures movie starring Will Ferrell.
* Made a mistake? Hit the undo button to take your move back.
* Collect Crystals to achieve the highest score possible
* Avoid the Sleestaks
* Replay any completed level to try and get a higher score.
* Local scoreboard

Download the iPhone game using iTunes, or the App Store! And don’t forget to check out “LAND OF THE LOST,” opening in theaters nationwide on June 5th!

Will Ferrell stars as has-been scientist Dr. Rick Marshall, sucked into one and spat back through time. Way back. Now, Marshall has no weapons, few skills and questionable smarts to survive in an alternate universe full of marauding dinosaurs and fantastic creatures from beyond our world—a place of spectacular sights and super-scaled comedy known as the Land of the Lost.

Sucked alongside him for the adventure are crack-smart research assistant Holly (Anna Friel) and a redneck survivalist (Danny McBride) named Will. Chased by T. rex and stalked by painfully slow reptiles known as Sleestaks, Marshall, Will and Holly must rely on their only ally—a primate called Chaka (Jorma Taccone)—to navigate out of the hybrid dimension. Escape from this routine expedition gone awry and they’re heroes. Get stuck, and they’ll be permanent refugees in the Land of the Lost. 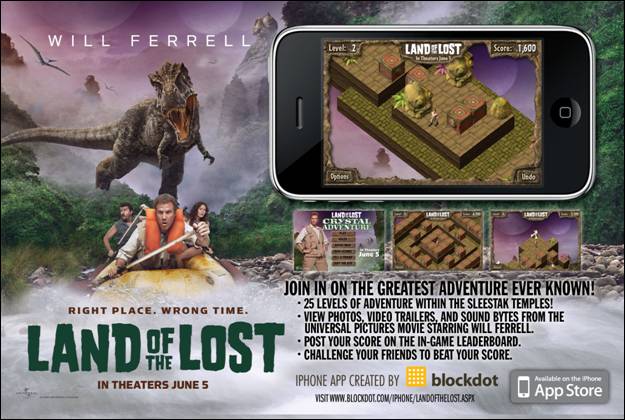