“Footloose” Opened at the Muny in Forest Park Last Night 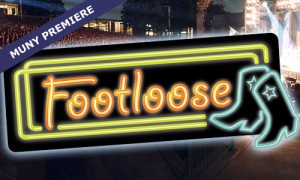 Last night, St. Louis theater fans were in for a treat. The week long run of Footloose began yesterday, August 2nd, and marked the first night that this show has been performed on the Muny stage.

Life in Bomont is quiet and predictable, until the arrival of Ren, the bad boy from the Big City. Ren knows that that life in a farm town will be different from life in Chicago but he isn’t ready for all of the local laws, including a ban on dancing in public. So Ren and a group of rebellious teenagers find a loophole, defy authority and dare to dance!

Most people are familiar with this show due to the 1984 film starring Kevin Bacon, but tonight gives audiences a chance to experience the story in a whole new way. The score to this show rocks being nominated for both a Tony and an Oscar. Songs featured include “Footloose”, “Let’s Hear It For the Boy”, “Holding Out For A Hero” and “Almost Paradise”.

Curtis Holbrook plays Ren. Holbrook has had small parts in movies Hairspray and Across the Universe. He has also starred in shows Fosse, The Boy from Oz, and Xanadu. In 2009, he played Action in the Broadway revival of West Side Story.

Meggie Cansler returns to the Muny stage after her performance last season as Penny in Hairspray. Cansler has starred in Finian’s Rainbow, Cry Baby, and The Apple Tree. She also was part of the ensemble in the Broadway and U.S. tours of Wicked serving as Glinda’s understudy.

This would be a great show to bring the whole family for a night out under the stars. Purchase tickets or get there early to get seats in the Muny free seats. For tickets call (314) 534-1111 or visit online at www.metrotix.com. For more information, visit muny.org.