Overall, when it comes to adapting video games into film, the ratio of good to bad is staggering. This year, we’re one for one with a faithful adaptation of Tomb Raider and now Rampage. I don’t know what it is that screenwriters and directors don’t get when it comes to creating that bridge to transition from one medium to another, but it rarely goes well in my opinion, and that’s very much the case with Brad Peyton’s Rampage.

There is a plethora of video game properties that exist and are rich in story and interesting characters, so why would anybody think that a 1986 arcade game in which the sole objective is to demolish cities as quickly and efficiently as possible as three mega monsters should be the one to make? That’s literally all that the Rampage game is, and because of that very limited source material, it took (believe it or not) four writers to come up with the most basic and phoned-in screenplay imaginable.

Rampage stars Dwayne “The Rock” Johnson and this is his third collaboration with director Brad Peyton (San Andreas, Journey 2) and it’s more or less what you’d expect as such. Johnson portrays Davis Okoye, a primatologist who has a closer relationship with an albino gorilla named George than he does with actual people. Although the beginning of the film portrays Davis’ indesire to be around people outside of work, Johnson’s charisma is as prominent as ever throughout the film to hardly ever make it believable. The motion capture work on George is pretty exceptional, however, and his back-and-forth through ASL with Davis leads to some pretty humorous exchanges, although they lead to a bit of predictability near the end that had me expecting and subsequently rolling my eyes when it inevitably happened.

After an opening sequence in space (which in retrospect seems entirely out of place in this movie), three capsules of genetic editing gas for what we later learn to be called “Project Rampage” make their way to earth and consumed by three creatures – a wolf, a crocodile, and of course, George. These three creatures grow to monsterous sizes and begin drawing attention to themselves, specifically George who’s in captivity but quickly outgrowing his enclosure and his appetite.

Malin Akerman and Jake Lacy are introduced as the corporate villains and creators of “Project Rampage” and are not-so-surprisingly the worst part of this movie. Every additional scene featuring this oddly cast duo was more incredibly irritating than the last. Should I even mention that an actual 1986 Rampage arcade machine is just randomly sitting in their office unsubtly shouting “this is what you’re watching?” Probably not, because you won’t miss it begging you to spot it.

Also thrown in the mess are Joe Manganiello in a glorified cameo, and Naomie Harris as a former scientist who’d worked on “Project Rampage,” and Jeffrey Dean Morgan who is arguably the highlight of the movie. Morgan plays a government agent named Harvey Russell in an over the top performance and shines in every scene he pops up in. I say “pop-up” because it just seemed like no matter where the scene happened to take place, Russell would just show up with a some witty dialogue and and a solution. When he and Johnson were together onscreen, it was a battle of wit and charisma and worked like a charm.

After sitting through an hour and a half of forgotten characters, insufferable characters, and other nonsense, the audience will get what they hopefully came for – three giant monsters rampaging through the city of Chicago and fighting each other while at it. It’s mindlessly entertaining at times, but honestly, I can’t say it’s really worth the wait. When it’s over, Rampage is as forgettable as the last big destruction movie from three weeks ago (Pacific Rim: Uprising) but Johnson and Morgan do their best to keep the viewer entertained.

In my eyes, Johnson is 0 for 2 in video game adaptations (this accompanied by Doom), but if he has to do a couple of stinkers for us to get a wonderful video game inspired film such as Jumanji: Welcome to the Jungle, I’ll allow it. 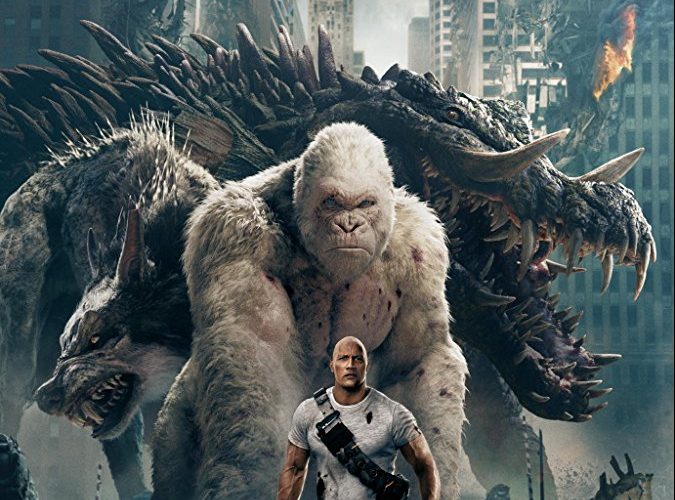