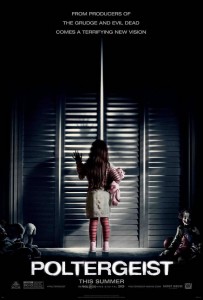 What happens when legendary horror filmmaker Sam Raimi joins forces with Gil Kenan, the director of Monster House to remake one of the greatest horror films ever made? A soulless train wreck of a movie.  This “haunted house” remake doesn’t come even close to the originality of the 1982 version.

We are introduced to the Bowens.  A family that is relocating to a new house after Eric Bowen (Sam Rockwell) has lost his job. Amy Bowen (Rosemarie Dewitt) is a struggling writer who stays home with their three kids, Kendra, Griffin, and Madison (or Maddy). This is where I have my first issue with the film. One of the things that was so wonderful about the original was that they were a family that loved each other. They felt real. The family in the 2015 version felt very manufactured. Except for the singular performances of Sam Rockwell, Kyle Catlett (Griffin), and Kennedi Clements (Madison) there’s nothing that made this family feel real at all.

Much like its predecessor, Maddy quickly becomes the focus of whatever creepy things are in the house.  Griffin catches her talking to “nobody”.  In the second night that the Bowens stay in the house, Maddy gets sucked into the super creepy closet. After Griffin and Kendra try to explain what has happened, we are treated to a redo of the scene where Maddy is talking through the TV.

We are then treated to one of the most random plot devices that has ever been on filmed.  Not having anywhere else to go, Amy goes to the Department of Paranormal Research (yes you read that correctly) at her old college. It’s here we meet Dr. Brooke Powell (Jane Adams) and her crew.  It’s from here that the 2015 version goes beat for beat like the original.  Everyone in the movie becomes completely useless.  So useless in fact that they have to call in Carrigan Burke (Jared Harris). Burke is a guy who hosts a reality TV show in the vain of Ghost Hunters.

There are some really good moments and some decent jump scares. Kennedi Clements is just as adorable as her predecessor (Heather O’Rourke), there’s a pretty good scenario involving dirt and worms (it takes the place of the infamous bathroom mirror scene from the original), and there’s a really good scene involving a drill.

That’s where my praise will stop. Kenan makes a massive misstep by showing up the “other side”. Instead of leaving it up to the imagination, Kenan shows the viewer a really bad CGI version of the “other side”.

Overall, this is not a good movie. There was no reason to remake Poltergeist. The original version still holds up and doesn’t seem dated in the least. If you’re going to remake or reboot you need to do something different.  This was just a retread of much better film. Do yourself a favor, save your money and put it towards a Blu Ray copy of the 1982 version. Plus, the original version has Craig T. Nelson.  Who doesn’t love Coach?