FAST & FURIOUS on DVD and Blu-Ray Today – Enter to Win a FREE Copy! 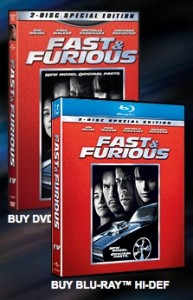 FAST & FURIOUS has been released on DVD and Blu-Ray today, July 28!

When a crime brings them back to L.A., fugitive ex-con Dom Toretto reignites his feud with agent Brian O’Conner. But as they are forced to confront a shared enemy, Dom and Brian must give in to an uncertain new trust if they hope to outmaneuver him. And from convoy heists to precision tunnel crawls across international lines, two men will find the best way to get revenge: push the limits of what’s possible behind the wheel.

Included on the 1-disc and 2-disc DVDs:

Good Luck! And don’t forget to pick up your copy of “FAST & FURIOUS” on DVD and Blu-Ray!