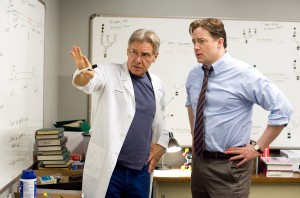 A film guaranteed to touch your heart or at least manufactured for that feeling. Exradordinary Measures looks like one of those films that people will cry over, but ultimately forget.  Harrison Ford does best in his action roles (Indiana Jones, Star Wars, Blade Runner, etc.).  I’m looking to see if he can finally move into dramatic territory, and leave the action hero behind.  The casting of Brenden Fraser doesn’t give me much hope about the film either. Don’t get me wrong, I’m sure he’s a nice guy, but his acting is horrible. Now, once you factor in a January release date, there isn’t a lot of hope for this project. Maybe it will surprise us.  The story is uplifting and shows you the strength of human character at its best. So it can’t be completely bad.

From the front page to the big screen, the true story of John and Aileen Crowley, a daring couple hoping to cure their two children by investing their trust in an unconventional specialist (played by Harrison Ford) is adapted in this CBS Films drama. What Happens in Vegas’ Tom Vaughan directs from a script by Robert Nelson Jacobs. ~ Jeremy Wheeler, All Movie Guide