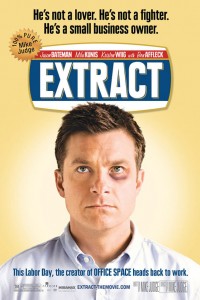 The latest from Mike Judge is a big improvement over his last film, Idiocracy, but doesn’t approach the status of his most famous film, Office Space. Judge turns the limelight this time on the boss instead of the worker, and while funny we find out the working man is much funnier.

Extract takes us into the life of Joel, an owner of a flavoring extract factory. Joel (Jason Bateman) is on the verge of being able to sell his company that he has put so much of his life into, but not all is great. His sex life with his wife, Suzie (Kristin Wiig), is in shambles and if he doesn’t get home before 8 he loses any chance of being with his wife. His company is filled with “Dinkuses” as his manager Brian (J.K. Simmons) calls them, who are slightly incompetent and indignant. When an accident happens on the floor due to incompetence of other workers, Joel’s hardest working employee, Step (Clifton Collins Jr.) is left with slightly less manhood than what he went into that day of work. Enter in the beautiful Cindy (Mila Kunis) who is there only to take advantage of the situation by playing all sides against each other to make her payoff. In the middle of all this Joel’s best friend and bartender confidant Dean (Ben Affleck) has convinced him to hire a male prostitute (Dustin Milligan) for his wife so he can cheat on her guilt free. This whole jumble of story has a lot more to it than the average Judge film.

One of the best things about Extract is the cast. Everyone with the exception of Kristen Wiig is used amazingly well. In fact I think it is safe to say that this might be Ben Affleck’s best comedic performance in a film to date. I’m not a person who despises Affleck, but I always wonder about his choices, but he is a scene stealer in this film. There isn’t a single joke he serves up that isn’t received well. I find it a bit disconcerting that person I assumed would be the least funny comes off the best in this film, and the person who I think has the most comedic talent in the cast, Wiig, is so under used and isn’t given much to do. Wiig’s character is that of a lonely house wife, and it seems it is way too hard to make her into a funny character. The most boring parts of the film are her and Bateman’s interactions. Both characters are more straight characters and they don’t seem to play well off of each other. Bateman carries off his role well enough, it is one we’ve seen him do so many times before. Surrounded by droves of idiots one can’t help but think of his role on Arrested Development. It is pretty safe to say that Joel and Michael Bluth are cut from the same cloth.

The supporting cast is very good as well. As much as I was surprised by Affleck’s performance, I was just as surprised by Dustin Milligan’s Brad. The only thing I really know him from is his role on 90210 (which he is no longer on after 1 season), so I expected to be a bit annoyed by him. His moronic self promoting prostitute has no depth, but as that is kind of the point he pulls it off brilliantly. David Koechner finally plays a role other than hillybilly in this, and moves up to annoying suburbanite neighbor who doesn’t know when to shut up. He feels like he is pulled from the same bizarre universe that Office Space takes place in, and since Judge is directing, he probably is. Mila Kunis plays her role well, it isn’t hard to believe that she could work people over with her looks. I think every guy in the theater in the opening scene was just in awe of her as the jazz fusion guitarists at the music store. From the trailer I was led to believe she was a main role, but she ends up being a tool to move the plot along, and not much background is given to her character.

No one goes to a film like this to see layered performances though. They main object of a film like this is to make you laugh, and this does the job quite well. Some scenes are a bit ludicrous, but that is to be expected from a Mike Judge film. His characters are more caricature and while it isn’t biting satire it still pokes at some our middle class ideals. It’s hard not to look at the characters in the film and think of people you know who are just like it. I know a couple of Nathan’s, Dean’s, and Mary’s, which makes them that much funnier.

If you are a fan of Judge’s work and were less than impressed by his last effort this one will restore your faith a bit. Don’t expect it to become quite the classic of some of his earlier efforts, but expect to be entertained.

Extract is a B.