Enter to Win Passes to ‘Invictus’ at the St. Louis Advance Screening 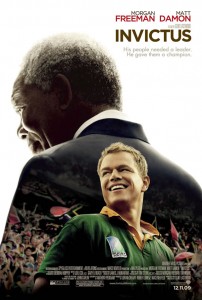 Actor Morgan Freeman portrays anti-apartheid activist and former South African president Nelson Mandela in this Clint Eastwood-helmed political drama adapted from author John Carlin’s book The Human Factor: Nelson Mandela and the Game That Changed the World. Set just after the fall of apartheid and during Mandela’s first term in office, The Human Factor explores how the political prisoner-turned-president used the 1995 Rugby World Cup — which was hosted by South Africa — as a means of bringing blacks and whites together after decades of violence and mistrust. Matt Damon co-stars in the Warner Bros. production as rugby player Francois Pienaar. ~ Jason Buchanan, All Movie Guide

In order to enter the contest, simply leave a comment at the bottom of the page telling us about your favorite sport. Winners will be chosen at random and notified via e-mail. NO PURCHASE NECESSARY.

Please note that winning passes to “Invictus” does not guarantee admission to the film. You must arrive early as seating is first-come, first-served. It is usually safe to arrive at least 1 hour or more before show time!