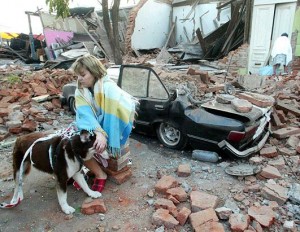 Breaking news – An earthquake measuring 8.8 on the Richter Scale hit outside of Santiago, Chili this morning at approximately 03:34 their local time.

Elliot Yamin, former American Idol, is actually in Chile and experienced the earthquake. Elliot called into CNN, and described his experience. Watch the video below:

The site of the earthquake is very close to the same spot that experienced the largest recorded earthquake in history – the 9.5 where 1,655 were killed in 1960. Since 1973, there have been 13 earthquakes measuring 7.0 or higher on the Richter Scale.

So far, the massive earthquake has taken the lives of at least 82 people.