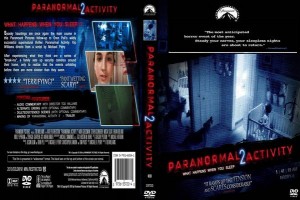 Paranormal Activity 2 seems to say to the original “I’ll see your frightened young couple and raise you a baby”; it doesn’t really change the formula with its most recent installment, but it might not need too. P.A.2 uses the same “archived” video and journal-like timestamp routine to tell the story of a middle aged couple, their teenage daughter and new baby.

The new film improves in some areas and falls back in others. The primary improvement comes from the story itself. While the first film left a lot of questions unanswered and kept the main characters fairly anonymous, in P.A.2 we get some back story. While the effort is certainly admirable, the back story we’re given is still rather flat, as are the characters. The two adult leads are virtually identical to the first film; the wife is more open to the possibility of a haunting and the husband is hesitant to believe in ghosts and dismisses fairly obvious signs of “paranormal activity” as a result of wind or coincidence. The depth of the teenage daughter is also disappointly flat. In this movie she is essentially the third lead and in any other movie she would be Teenage Daughter #3. The baby probably has the best screen presence of anyone.

But even in spite of its flaws, P.A.2 delivers what it promises…some good scares and a fun way to spend the evening. P.A.2 is not a perfect film, but if you enjoyed the first one, you’ll probably like this one. They are essentially the same movie and actually lap over one another in a pretty unexpected way. Above anything else, this movie requires the viewer to suspend his or her disbelief for an hour and half and “buy in” to what’s being presented on screen. Much like The Blair Witch Project in that regard, if you’re put off in the first 10 minutes, it isn’t going to get any better.

If you’re patient and a fan of accumulative tension, you’ll probably like this movie. If not…you’ll hate it. Like the original, the reason why P.A.2 works is because of its use of silence and tension built as you search each clip of video surveillance for a clue of paranormal activity. Think of it as a scary Where’s Waldo.

If you haven’t seen either one, you should probably watch the original Paranormal Activity first, but if you saw it and liked it…check out this one.

-Not worth your money-

-Worth somebody else’s money-

What’s your favorite “true” scary movie? Let us know in the comments section below.