Dusting off the Brooms 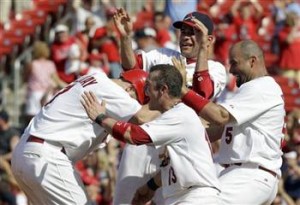 Matt Holliday, being dragged away by mobsters for failing to pay his debts. Or being mobbed after a walk-off hit. You be the judge.

Much like a girl who teases and frustrates a man to the point of no return, the 2010 Cardinals have flirted with sweeps throughout the season, only to come up empty.

Not this time, though.

More importantly, they didn’t have to lean on any single player throughout. Sure, there were several bright spots. Carpenter and Wainwright both pitched lights-out. Yadier Molina drove in four runs friday, hitting the only Cardinals home run of the series. Allen Craig posted two clutch hits yesterday, driving in three runs, including the tying run in the bottom of the 9th with two outs. Matt Holliday showed yet again why he’s the highest-paid player on the team. But the series was truly a collective team win. The Cardinals now face a reeling Phillies team that just dropped three out of four to the Cubs and saw their ace, Roy Halladay, get bombed by the Cubs, surrendering five earned runs in six innings.

Perhaps this might be the turning point in the season for the Cardinals. Before the series win in Houston before the break, the Cardinals lost a heartbreaking series to the Rockies. With some of the team cylinders misfiring right now, the Cardinals are gonna have to be a bit scrappier than pre-season pundits predicted.

The Cardinals brought up Fernando Salas yesterday, an effort to re-load the bullpen after it got taxed a bit this weekend. Personally, I’d love to see Salas on the roster for the rest of the season. He’s a hard-throwing righty who’s gotten 17 saves and posted a 2.10 ERA for Memphis, striking out 35 in 30 innings. In the majors, he’s done well also, giving up just one earned run in 7.1 innings. He’s being groomed as a potential closer when Ryan Franklin retires after next season (along with Jason Motte), so I’d love to see him develop at the major league level.

Over at Sports Illustrated’s website, one of the frontpage articles is an essay on fraternization among players and whether it’s bad for sports in general. It lists several examples of well-known competitors such as Bob Gibson, and given the success of those examples, it’s hard to argue with the results. Much ado was made about Joey Votto‘s comments about not liking the Cubs and Marlon Byrd, even though they were All-Star teammates, but this used to happen frequently (again, see: Bob Gibson).

Gibson and several of the other examples they list also played during an era where free agency wasn’t as prevalent, or didn’t exist, period. Players spent longer periods of time with one team. Nowadays, bolting from one team to another is commonplace. It’s natural to build friendships with people on other teams given this travel and the spread of communication.

Now, friendship to the point of collusion or interfering with competitive results obviously is a detraction. Alex Rodriguez’s tipping of pitches to friends on the other team was widely derided, and rightly so. But I always found I never eased up on trying to win when I played against friends; conversely, I used it as motivation. Nothing better than bragging rights.

Sports are competition, sure. But they’re also not an end-all, be-all war. Give your all, certainly. But at the end of the day, you’re working towards the same goal: winning. On that, it’s not unreasonable to find common ground.

Unless it’s the Cubs.