Reel Big Fish are coming to the Pageant in St. Louis Tonight (8/13)! 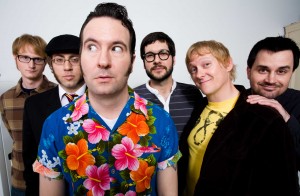 This is going to be a great show that you won’t want to miss!

Reel Big Fish is a southern California ska punk band who broke into the mainstream in the mid to late 1990s.
Their debut album, “Everything Sucks” (1995), was an underground hit and led to a deal with Mojo Records, an indie label. “Turn the Radio Off” (1996) established the band in the underground music scene, and they began touring throughout the USA. After the single “Sell Out” began breaking into the mainstream, including MTV, the album made an appearance on the charts.

Fame, Fortune and Fornication was released on January 20, 2009. The album is full of SKA / Reggae covers of great songs like “Talk Dirty To Me” by Poison, “Won’t Back Down” by Tom Petty, and “Brown Eyed Girl” by Van Morrison. Here is a full list of songs on the album:

DON’T FORGET! Reel Big Fish will be playing at the Pageant tonight (8/13)! We hope to see you there!