DOME FIELD ADVANTAGE RETURNS AS THE RAMS SACK THE BOLTS!

Last Sunday the Rams returned to the Edward Jones Dome to take on one of the best teams in the AFC, the San Diego Chargers. The Chargers enter the game as the NFL’s best offense and they were #2 on defense. Doesn’t give much hope to a team that just got routed by an 0-4 Lions team 44-6, but the crowd was into the game from the opening kickoff!

Sundays game was a classic 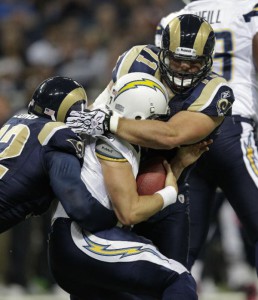 The first half was all Rams. St. Louis came out with a plan to stop San Diego on the run and bury Phillip Rivers in new turf at the dome! The Defense was like a swarm of blue and gold bees, flying all around and coming together on top of #17. The defense recorded a San Diego record 7 SACKS! Chris Long had two, Larry Grant had two, Fred Robbins had one and James Hall had two sacks and a blocked field goal! 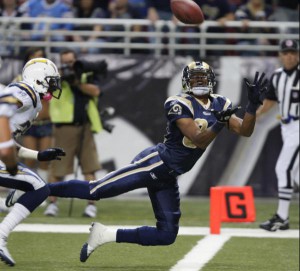 The first half also had the Ram’s introduce their new wide receiver Danario Alexander in a big way with a 38 yard diving touchdown grab! This brought the crowd to their feet and started chants of M-I-Z and Z-O-U! The sound in the dome was deafening and that is what we have been waiting for a local boy to make the Rams and soar. Alexander ended up with 4 catches and 72 yards and the first (of many) NFL touchdown of his career. Alexander had no ill effects following the game and is eager to get back on the field next week in Tampa Bay.

Steven Jackson also did his best imitation of a human battering ram plowing through the San Diego front seven gaining 109 yards on 29 carries and breaking into the endzone for the Ram’s second touchdown of the first half. Josh Brown got the scoring started with a 39 yard field goal. The Rams dominated the first half both on offense and defense, keep the ball for 2/3 of the half. Bradford also had a resurrection from last week throwing for 198 yards and a touchdown with NO INT’s. San Diego finally managed to finish a drive with a Nate Kaeding field goal of 41 yards. The new look Rams were beating the mighty AFC WEST San Diego Chargers 17-3.

The second half was different story filled with drama. The Chargers made some adjustments at halftime as their defense was able to bottle up Jackson’s ground game and made it nearly impossible for Bradford to move the ball down the field. Rivers and runningback Mike Tolbert were able to orchestrate a 6 minute drive that ended in a a 1 yard run for a San Diego touch down. It was now Rams 17 Chargers 10. As the fourth quarter began the Edward Jones Dome crowd grew nervous as the Chargers were a score away from tying the game. The Rams answered with another Josh Brown field goal of 48 yards elevating the Rams to a 10 point lead with under 5 minutes left. It was “white knuckle time” as the Chargers struck quickly for another touchdown in 40 seconds and just trailed by 3 points 20-17. 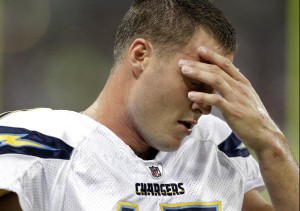 Norv Turner, head coach and brain surgeon of the Chargers, decided to kick the ball away to the Rams with just over 2 minute left in the game hoping to stop the Rams and get the ball back for a tying field goal. They must have forgotten about #39. Steven Jackson took the ball and plowed his way down the field burning up the last two minutes of the game and restoring the Ram’s “DOME FIELD ADVANTAGE”! The Rams win 20-17 and now post a record of 3-1 at the Edge (the new name of the Dome).

The Rams move to a mark of 3-3 and sit just a half game out of first place in the NFC WEST! Who would’ve thought that 4 months ago? We have proven we can dominate any team in our house, now we must do it on the road! The outlook is bright the next 3 weeks, we head to Tampa Bay (3-2) this weekend , 0-5 Carolina comes in trick or treating on the 31st and then we have our bye the first week of November. With two months left in the season we could be sitting in first place in the NFC West with a record of 5-3! WOW!!!!!

Check back next week as we will be celebrating another Ram’s victory!

I am Ram Man and I will see you in the end-zone!!!