Invites you to enter for your chance to win a family four pack of passes to a 3D advance “screaming” of Disney*Pixar’s MONSTERS UNIVERSITY! 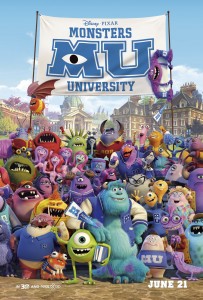 Mike Wazowski and James P. Sullivan are an inseparable pair, but that wasn’t always the case. From the moment these two mismatched monsters met they couldn’t stand each other. Monsters University unlocks the door to how Mike and Sulley overcame their differences and became the best of friends. Screaming with laughter and fun, Monsters University is directed by Dan Scanlon (Cars, Mater and the Ghostlight, Tracy) and produced by Kori Rae (Up, The Incredibles, Monsters, Inc.).

No purchase necessary. Void where restricted or prohibited by law. At the screening seating is not guaranteed and is available on a first-come, first-served basis. Refer to screening pass for further restrictions. Screening pass winners will be drawn at random and notified via mail. Limit 2 admit-two passes per person. While supplies last.