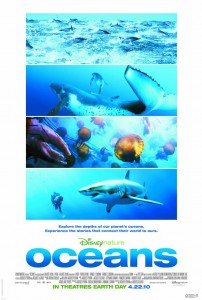 Oceans, the latest documentary to be released under the Disneynature label, follows closely in the footsteps of last year’s Earth. Just as Earth did, Oceans opens on Earth Day, and Disney will donate a portion of every ticket sold in its first week to conservation groups. The point of both movies is to show, in the most breathtaking way possible, a side of our world with which most people have become complacent, while at the same time attempting to make a difference by raising awareness of the impact humans have on the planet. Obviously the main distinction between the two films is the setting, but by changing the location from land to water, the stakes and payoffs are immediately much higher. Not only is it incredibly difficult to shoot under and around water, but only five percent of it has been explored, and as a result, Oceans contains some of the most amazing footage of any nature documentary ever made.

This wildlife opera directed by Jacques Perrin and Jacques Cluzaud of Winged Migration fame is an easy movie to underestimate. Now that most of the world has gone nuts for Discovery Channel’s Planet Earth and Life series, it might seem like there would be no way to put a new spin on showing animals in their natural habitats, but this misconception works wonders for the movie. Not only do they show bizarre creatures I’ve never seen before like the narwhal, the unicorn of the sea, but the editing and creativity that goes into tying all of the short stories together is quite spectacular. Another subliminal treat the film offers comes with the realization of why these images feel so fresh; the techniques the filmmakers used to capture these private moments didn’t exist before because this is the first time this technology has been available.

Now if you started to nod off during those first paragraphs, there’s a good chance the same thing will happen in the theater. Oceans is similar to Fantasia in its amazing visuals set to a wonderful orchestral score, but it has the power to bore the snot out of certain types of kids, which was made ever-so-clear to me by the little boy sitting to my left who would groan quite loudly whenever the movie got quiet. He constantly rocked back and forth in his chair while using his finger to make a popping noise with his mouth. Another possible outcome could be your child’s resemblance to the little girl sitting on my right who couldn’t help but narrate the movie for her parents and yell out the name of every animal that came up on screen. To her credit, Pierce Brosnan’s narration is almost too soothing, so there may have been a chance she was doing it simply to stay awake.

Look, I can throw facts at you; it took seven years to make and at one point, a crew spent 190 days straight trying to capture never-before-seen footage of a blue whale feeding on krill, but it still won’t matter because to some, this movie isn’t about anything.

“What’s the big deal? A guy dropped a camera under water for four years, edited it for two, and then got a celebrity to narrate it? Sounds like a waste of time to me.”

But for those with an inquisitive mind who are fascinated by the world around us and could spend all day at the zoo being captivated, this is the perfect popcorn film – except in this case all of the insane special effects are real.