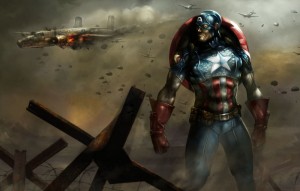 I’m not really a big fan of when actors and directors do this sort of thing, but the following quote is director Joe Johnson apologizing for what he knows was a disappointing Wolfman.  I personally liked it, but there were plenty of critics who did not.  He also talks about the upcoming Captain America.

I had three weeks of prep on WOLFMAN, a ridiculously inadequate amount of time to try to bring together the fractured and scattered pieces of the production. I had taken the job mostly because I had a cash flow problem, the only time in my career I’ve ever let finances enter into the decision process.

Money is always the wrong reason for doing something that requires passionate devotion. The production was a leaky, rudderless ship in a perfect storm suffering from bad decisions, infighting, reluctance of the powers-that-be to take responsibility, and too many under-qualified cooks in the kitchen. The good news and bad news about directing is that when the picture works you’re showered with all the credit and when it doesn’t work you’re dumped on with all the blame. Both scenarios are undeserved. I take full responsibility for THE WOLFMAN not working because it goes with the territory.

I had thirty weeks of prep on CAPTAIN AMERICA. I have a small team of qualified, supportive, creative producers who are actually helping me achieve my vision of the film. I had a dream cast headed by Chris Evans. I had the best designers, artists, sculptors, craftspeople…a creative team that could design, build and photograph anything and have it look amazing and beautiful. We had unbelievable luck with the weather wherever we shot in England. The weather was so good we were compelled to make it rain for a couple of sequences just for some variety. At times I felt as if the gods were saying, “Ahem, sorry about that wolfman thing…let us make it up to you.” CAPTAIN AMERICA was probably the most universally positive experience I’ve had in this mad business.