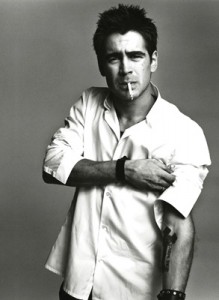 I think Colin Farrell is great.  So he has a little bit of a wild side who loves women and beer.  That just means he can keep the paparazzi busy.  You can’t deny that the man can act though.  Farrell is already filming one high profile remake that has fans upset, Fright Night, but can he make that two with Total Recall.  He isn’t signed on for the film yet, but rumors say he recently dropped out of David Cronenberg’s Cosmopolis to do Total Recall.  Here is what he had to say about the film.

“I’d like to. I just don’t know. I’m not sure. I haven’t been home for Christmas. I haven’t made the required calls. I don’t know. I think, maybe. There’s a good bit of action. It kind of sits on the fence in a really good way. It kind of sticks to one half or the other.  It’s clever and it’s well written. And there’s loads of action. I saw some of pre-visualizations already, that have been done for the world that they’re going to create and it’s wicked, man. It’s the first time in years where I went, ‘Wow, I could be part of that? In that frame?’ It’s gone back to the original.”

And what convinced him to join the cast of Fright Night?

“I didn’t want to like it when I read it. I really didn’t. ‘Cause I wanted to be able to go, ‘What? They’re remaking FRIGHT NIGHT… Hollywood.’ So I read it and I liked it. So fuck it, I’m going to go to work. And I’d seen LARS AND THE REAL GIRL and really liked that. The cast was incredible in it. So, entertainment.  If it’s not that than it’s not, but it’s not in competition with the original. It doesn’t negate the existence of the original. The original is still around. It might find a new audience. If it’s not an hour and fifty minutes of entertainment then we screwed up.”

Which film are you more excited to see?  Let us know in the comments below.