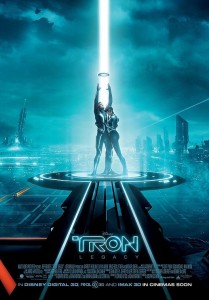 After months of a heavy onslaught of marketing, Tron: Legacy hits theaters this Friday 28 years after the original graced the big screen.  I recently checked out Tron on DVD for the first time, and I must admit, I was not impressed.  The idea and visuals are cool, but it is certainly dated and lacks an engaging story.

But that is just my opinion.  There are plenty of fans that have been clamoring for this sequel for years.  Two things I certainly am looking forward to is the soundtrack by Daft Punk and just how visually stunning the film will look.  It is probably the first film since Avatar that I have been excited to see in 3-D.

To get you all pumped up for the new film, I give you a couple of fun facts regarding both Tron and Tron: Legacy.

And here is that 2008 Comic Con footage in case you haven’t seen it: