Did You Hear About The Morgans? – Movie Review 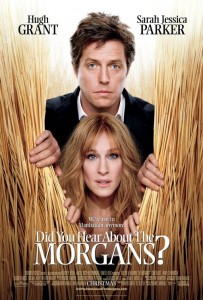 For film critics, December is a busy month.  It’s a mad scramble and a blur of movies as studios pummel us with films in time to qualify for Oscar consideration, Golden Globes, various other awards and critics’ year-end lists.  Invariably there is a film that slips through the cracks.  Did You Hear About the Morgans? is just such a film.  It will undoubtedly be left off of numerous “Worst Pictures of 2009” lists for no other reason than the fact that it screened too late in the year.  Well played, Columbia Pictures…well played.  Hugh Grant and Sarah Jessica Parker star as Paul and Meryl Morgan, a married couple on the brink of due to Paul’s adulterous affair.  The Morgans have been separated for three months though he’s trying desperately to repent and re-earn his wife’s trust.  When the couple unexpectedly witnesses a murder they are placed in the Witness Relocation Program and forced, against their will, to live together.  Hilarity…um, ensues? [morelink]

The Morgans are whisked away to the state of Montana where they are housed by local U.S. Marshall Clay Wheeler (Sam Elliott) and his wife Emma (Mary Steenburgen).  The vast majority of the humor is directed at the gun-toting, country music-loving “rubes” of small town America.  It has an air of condescension that’s almost palpable.  For such a lighthearted film, it’s decidedly mean-spirited.  Of course, all of this could theoretically be overlooked if any of it were funny.  None of it is.  The film descends (if that’s possible) into a string of cringe-worthy jokes, most which were seem to have been lifted from chain emails.  One joke is so old I heard a variation of it on the Jack Benny show.  And, just for the record, I’m not kidding…the Jack Benny Show.  Honest to God.

The chemistry between Grant and Parker is non-existent.  I guess I should give them some credit, they got the “couple-on-the-edge-of-divorce” part right.  It’s the part where they fall back in love that’s hard to believe.  And Grant doesn’t help the situation any by adopting a weird acting style in which he spends the bulk of his time on-screen avoiding eye contact with the other actors.  If there’s anyone he shouldn’t look in the eye, it’s the audience.

On a scale of 1 to 10, with 10 being My Blue Heaven and 1 being Witless Protection, Did You Hear About the Morgans? gets a 3.