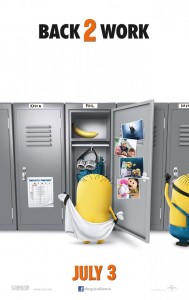 Forget for a moment that children’s film is using Eminem for their latest trailer, and instead focus on the actual content presented.  2010’s Despicable Me was a bit of a surprise for most folks. It was an animated film that wasn’t a Pixar production, but did solid numbers at the box office. The film also had some great critical response, and all of these have led up to the inevitable sequel. Kid’s films are cranked out to capitalize on the audience the first film drew in, and sometimes suffer for it.  Studios used this on me when I was younger in the form of about a thousand 3 Ninjas movies.

Steve Carell is back voicing the not-so-villainy Gru, and this time he’s out to help the good guys. Expect more of the same physical comedy, partnered with animation of adorable little girls. I just wouldn’t expect more Eminem on the soundtrack…

Click on the poster to see the full-size version.