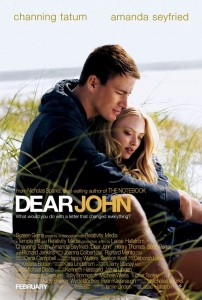 What John Grisham is to legal thrillers, Nicholas Sparks has become to chaste romantic weepies about star-crossed lovers. The latest film based on his work is Dear John. Starring Amanda Seyfried as Savannah and Channing Tatum as the eponymous John. The two meet while she is on Spring Break at the beach and he is on leave from the Army. John is a quiet man with a troubled past. But we know that John is truly decent when the film reassuringly shows us (via an odd cinematic shortcut usually reserved for dogs) that an autistic child trusts him. We see John and Savannah fall in love over the course of two lusty, yet virtuous, fun-filled weeks. They promise to stay in touch while he finishes what little time he has left in the Army. But seeing as how these scenes are set just a few short months before 9/11 it’s a pretty safe bet that if there is one thing Osama Bin Laden hates more than America, it’s true love.

As John goes off to war, the two promise to write each other letters (hence the title). “Why letters,” you ask? After all, we live in age where soldiers have blogs and post footage on YouTube. It’s simple really. Letters are more “romantical.” If they emailed or texted like, oh say….every other single soldier in combat today…we’d miss out on lingering melancholy shots of John eagerly waiting for mail call. The film’s notion of soldiers at war is so hopelessly antiquated that for a minute there, I thought Bob Hope might show up and entertain the troops.

Truth be told, it’s not that Dear John is a bad film, just a frighteningly earnest one. John collects coins and looks after his autistic father. Oh yeah, well she Savannah doesn’t drink or smoke and she spends Spring Break building houses for the homeless. These two make Frankie and Annette look like Sid and Nancy. Each person is more magnanimous than the last. Even when the characters in this film hurt each other, it’s for the noblest of reasons. The movie eventually drowns in its own omnipresent “goodness.” There’s no conflict in the film other than the random outside forces (i.e. plot devices) being used as obstacles to keep these two young lovers apart. Seyfried and Tatum do their best to keep things afloat, and it works for awhile, but by the time we reach the even more glacially paced second-half there’s not much they can do.

And on a side note. Just and FYI for Lasse Hallström the film’s director. There’s a special place in Hell for the man that casts Amanda Seyfried in a movie with multiple beach scenes yet never shows her in a swimsuit. I’m sorry but it needed to be said.