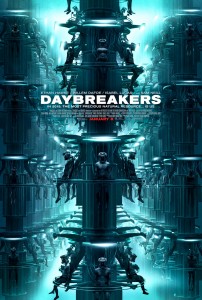 With the current glut of vampire movies it is easy to miss a film like Daybreakers. It doesn’t romanticize the creatures that until recently were considered monsters, but it does give them a bit of humanity. It surely isn’t a film that is aimed at the Twilight crowd, and with an January release it doesn’t have a lot of studio backing. It is a decent entry into the Sci-Fi/Horror genre though.

The year is 2019, ten years ago there was a viral outbreak caused by the bite of a bat. The result is that people turned into vampires. Not symptoms like a vampire, but vampires. They lack reflections, crave blood, have no pulse, and burn in the sunlight. Unfortunately for them, their food supply is running out. The human population is dwindling, and is down to less than 5%. Vampires are slowly turning into something diffent under the effect of not being able to feed. They are growing more violent, their appearance becomes more bat like, including sprouting a new set of wings.

There are companies that deal in supplying blood for the thirsty population. They are also working on a way to create a product that has the same effect as human blood. Head of this project is Edward (Ethan Hawke), a scientist who is close to cracking a viable substance to replace human blood.  Edward has not lost his humanity, and feels pity for the last humans around.  His abstains from drinking human blood, and instead thrives on the blood of pigs. It is not sustaining him perfectly, and he is starting to show the first signs of the change. As chance would have it he runs into a surviving human, who introduces him to the man that could hold the key to a cure.

Vampires usually dwell in the realm of fantasy, but this film takes them into the world of sci-fi. It isn’t an entirely new concept, but is done in a way that you can appreciate the thought put behind it. The writers of the story were smart enough to make the film seem based in science, but not delve deep enough to create a plethora of plot holes.

The look of the film has enough stylish touches to appreciate as well. Since people can’t walk in daylight anymore certain things are added to aid in the travel of the everyday populace. Certain cars are outfitted with cameras and the ability to block out UV rays during the day. Metro areas are filled with “Subwalk” tunnels to get around the city during the day time. Once above surface there are covered walkways in between buildings. There is no doubt that is something like this happened the world would change in looks drastically, but I’m not sure if it would really warrant fluorescent and neon added to much of the world.

It was refreshing to see even with the characters changed to vampires, much of the problems in the world were caused by greed and other human emotions. Self preservation is a strong animal instinct that doesn’t leave with a supernatural transformation.  I never got the feeling that the characters motivations were stupid or contrived, which is rare in this genre. Sure there is still a solid good vs. evil thing going on, but it wasn’t just humans vs. vampires.

When watching Ethan Hawke I couldn’t help but think of his role in GATTACA, where he so desperately wants to be something that he isn’t. This role isn’t that much of a departure from his role in this. Both the films are futuristic settings, and both have him overcoming physical differences. Although as far as realism goes, GATTACA still takes the cake.

Supporting cast including Willem Dafoe, Claudia Karvan, Sam Neill, and Michael Dorman all play their roles quite well. Dafoe is captivating as always as the man who holds the secret for a potential cure. Karvan pulls her best American accent, and plays a convincing enough love interest for Hawke’s Edward. Sam Neill once again proves he is at his best playing the creepy villain. Kiwi Michael Dorman is great as the troubled little brother of Edward, Frankie.

If you are looking for a different take on vampires, but don’t care to see them as superhuman romance characters, then this is a good antidote to that. It doesn’t throw out the mythology, and it certainly ramps up the suspense and thrills. Don’t go if you are a bit squeamish though. The blood here doesn’t drop, it spills to the floor by the gallons. Daybreakers is a solid horror film that maintains the fun without taking itself to seriously.

The Spierig Brothers get a bit of money to work with and create a wonderfully realized world in which vampires make up the majority of the earth’s population and while things may get a bit corny and convenient at times the film remains entertaining and solid due to its great work from its three great lead actors.

The world is populated by vampires and the blood supply is running out.  Humans have been harvested for years now and the vampires have been making countless attempts at creating a blood substitute to help sustain the population from turning into a nasty brand of vampires and eventually extinction.  Our lead Edward is the chief scientist on creating the substitute and has a rare compassion towards the humans being hunted since he himself was not turned by choice; as many of the vampires of the time were.  With the blood supply about to run out and rationing causing the population to begin to act quite crazy Edward gets in a near accident with a group of humans and is recruited by them to help their cause.  Their cause revolves around a human, Elvis, that claims to once have been a vampire and the prospect of changing back is quite enticing to Edward and his cause to help replenish the human race.

Now the first half hour of this movie is great.  The Spierig Bros. do a great job at introducing and creating this world where only vampires rule.  From the cars, to the logistics of the city, and countless other little cues and bits here and there you can tell that they have put a lot of thought into the pictures back story.  Which makes the whole thought process around the cure and actions of a few characters strike you as being a bit to, “huh?” when there was so much well thought out material in the film.  The cure doesn’t make any sense and they don’t really try to explain it and when the twist to the cure is thrown into the mix in the third act it is kind of a clever idea, but again doesn’t really make a whole lot of sense.  The characters also make a number of odd choices as well, with none being more glaringly stupid than one character makes with his child.

Where the Spierig’s logic begins to falter a bit surrounding logic as the film goes on, the effects and production values are top notch from start to finish.  The gore, the sets, the art design on everything is just great and the action bits in the film are up to par as well.  The sub-siders, which are the vampires that have lost their human characteristics, are especially impressive and realized and are quite terrifying whenever they show up.  The dialogue can get a bit wonky at times, especially for Elvis, but luckily enough one liners pay off over falling flat and the Spierig’s have a trio of top actors delivering the majority of the dialogue.  Also, what the hell was up with all the CGI bats they kept throwing at us as cheap scares?

Speaking of those actors Ethan Hawke is the lead as Edward and is great in the part.  He isn’t a bad ass vampire; he is a bit reluctant and only steps up to his abilities when necessary.  He also gives Edward the conviction for us to believe in his cause and to care about a vampire as they decimate humanity.  Sam Neill plays the bad guy of sorts in the film, Charles Bromley, who owns and runs the human blood bank and whose company Edward works for.  Neill is delightful as the corporate nasty and is appropriately evil without going over the top as he is just a businessman.  Willem Dafoe is obviously having a blast as Elvis and gives every line his all, even if it is awful, and his head first attitude really helps the jokes that work really pay off.  Dafoe also brings the needed skills to make the quiet moments with him work and is the most likeable character in the picture.  Claudia Karvan is very out matched by her other actors and doesn’t really impress as the female human that recruits Edward and beyond her no one really stands out a whole lot either; well, Isabel Lucas is actually fairly good in her brief screen time.

In the end, Daybreakers is a well conceived world with a story that doesn’t always work.  The films three leads do some great work and carry the film through to the end though, as does the Spierig’s effects/gore and clever bits the throw into the picture that keep us entertained till the end.  Though I will say that the third act has quite a few logic issues that might get to some, but its best to sit back and have some fun in this solid vampire flick that sticks to the old school rules of the creatures and still manages to create a fresh take on the genre.

Daybreakers is a B-