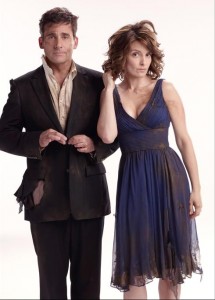 A movie that involves two people from different NBC shows who happen to be talented? Sure, sign me up. If you liked Steve Carell in Get Smart you’ll probably enjoy him in this as well. This time he actually has an age appropriate love interest who just happens to he his wife. Put Tina Fey in anything and I’m likely to watch it. She is a person who just lends the perfect amount of wit to whatever she is in. What I am worried about it the amount of slapstick in the trailer (running into a tree is funny?). Let’s hope that they let the characters have some good banter amidst all the other physical comedy gags.

Steve Carell and Tina Fey star in director Shawn Levy’s comedy about a couple whose routine date night becomes anything but when dinner and a movie just won’t suffice anymore. Their union in imminent danger of becoming hopelessly monotonous, the desperate couple goes to unprecedented lengths in order to preserve the spark. Mark Wahlberg, James Franco, and Kristen Wiig co-star in the 20th Century Fox production. ~ Jason Buchanan, All Movie Guide