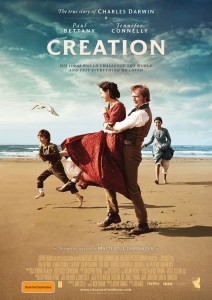 “Creation” is the story of Charles Darwin (Paul Bettany), and how he came to write  his most famous work – “On the Origin of Species.” What you see in this film is a look into his family life, and and a side of Darwin that you never knew existed.  On-screen, we are given a perspective on the obstacles that he had to overcome –  at home and in his mind.  Based on the  novel “Annie’s Box” by Darwin’s great great grandson Randal Keynes, the film gives you an appreciation for everything the man had to go through to change the way the world viewed science.

Charles Darwin was a world-renowned scientist, who lived in England during the 1800s with his wife and children. Times of course were much different then, and religion and science did not mix. Creation was the accepted explanation for all life on Earth, and up until then it was considered heresy to believe in anything else. Darwin’s wife Emma (Jennifer Connelly) was a very religious woman, which made it difficult for him to perform his scientific work without distancing himself. What his research found to be true could not be denied, and no matter the consequences – he felt that it was his duty to let the world know the truth. With a push in the right direction from fellow scientist Thomas Huxley (Toby Jones), Darwin decides that he must publish a book based on his findings. This body of work would become a scientific breakthrough, and has become the basis for evolutionary theory that is studies today.

Paul Bettany does an outstanding job in the role of Charles Darwin. Up until this point, Darwin has been envisioned as an old and stern, yet none-the-less brilliant, scientist. But Bettany gives heart to the role, and ‘evolves’ the man we think we know into a passionate human being. We discover more the heart from which his work is driven, and the effect his family had on his life. Much of his time is spent on-screen with the vision of his 10-year-old Annie (Martha West), who passed away two years earlier. The belief that he is somehow responsible for her death, because of his marriage to his first cousin, weighs on him while he tries to complete his work. But at the same time, her intelligence and curiosity lives on through memories to guide him. His interactions with Annie help to humanize the great scientist, and their glowing chemistry together proves to lighten difficult times. Jennifer Connelly also gives a great performance as Emma. The actress wears her emotions on her sleeve, as she battles with the choice of supporting her husband or staying true to her strong Christian beliefs. A mutual friend of the Darwins, Reverend Innes (Jeremy Northam) joins Darwin for debate on evolution vs. creation, creating some great scenes.

The story of Charles Darwin is one that everyone should know. “Creation” brings his life into a whole new light, and does a great job in showing us who the man was – rather than simply what he has done. With a strong cast and a touching story, the film is a win for director Jon Amiel – as well as for Paul Bettany’s performance.

Creation is a B