When I was an adorable moppet, my father gave me a 45″ vinyl single of Weird Al Yankovic’s “Eat It.” To my young ears, the song was the best thing I’d heard in my life. In fact, I loved it so much that I took that record to school for Show and Tell Day. I’d like to think that my teacher was amused, but she probably was annoyed to have 25 kids singing “Get yourself an egg and beat it.” 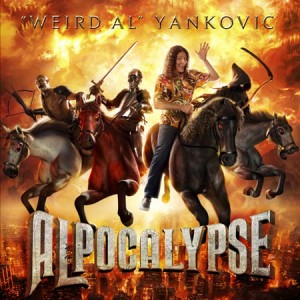 That teacher also likely would roll her eyes at the spectacle that parody artist Weird Al brought to the St. Charles Family Arena on June 3 in support of his album Alpocalypse, which will be released June 21. Crazy costumes, constant strobe lights and wacky lyrics brought the house down for the intimate half-filled arena audience of all ages. And though Weird Al’s show felt a bit redundant for those of us who have seen him in recent years, there’s no denying that Al always throws a party.

Weird Al came out swinging with a new signature polka melody. “Polka Face” covered songs by Lady Gaga, Justin Bieber, Lady Antebellum, Ke$ha and more and somehow makes them sound even better than the originals by virtue of his accordion.

Al rocked it back to the ’90s with his grunge parody, “Smells Like Nirvana,” complete with a Kurt Cobain-style wig and cheerleaders from the original music video. The new original song “Skipper Dan” from the upcoming album told the story of a Disney-style boat tour guide, but it felt a little lifeless. The James Blunt parody, “You’re Pitiful,” used the same t-shirt-changing shtick from two years ago, but it was made a bit more topical when a Charlie Sheen “Winning” shirt was thrown in.

“Perform This Way” is Weird Al’s lead single for Alpocalypse, and Lady Gaga certainly would be proud of the way Al parodied her “Born This Way” song in a blue peacock costume. The Green Day vibe definitely came through in “Canadian Idiot,” while new song “Craigslist” failed as a Doors tribute. To everyone’s delight, Al brought his fat suit out of the closet for his take on Michael Jackson’s “Bad;” during “Fat,” he bobbled around the stage as he sang about pie and tried not to barrel into his bandmates.

The best audience reaction of the evening came when Al donned a ponytail and red zebra-striped suit for “Wanna B Ur Lovr,” a Beck-style song that piled on ridiculous pickup lines. Al wasn’t content to sing this from the stage, instead electing to wander through the audience and serenade his admirers. With lyrics like “Girl, you smell like Fritos/That’s why I’m giving you this hungry stare,” how could he go wrong?

Weird Al closed out the night with his famous Star Wars duology, “The Saga Begins” and “Yoda.” With Palpatine on keys and stormtroopers lining the stage, Al had the perfect setup to portray Obi-Wan Kenobi sharing The Phantom Menace plot. In his Jedi robe, Al used Don McLean’s “American Pie” music as the backdrop for Jar-Jar, battle droids and Anakin Skywalker in “The Saga Begins.” He followed that up with “Yoda,” his 1985 take on The Kinks’ “Lola” in which he drops the transvestite from the original song and adds a Jedi master instead.

With costume changes after nearly song, there was plenty of time to take in bits of Weird Al history on the video screens. In addition to random mentions on sitcoms and late-night interviews, the concert featured a number of clips from Al TV, Al’s music and comedy program. The show ran on MTV and VH1 as promotion for most of Al’s albums and showcased remixed “interviews” with celebrities such as Madonna, Justin Timberlake and Celine Dion.

Having seen Weird Al a few times, I left a bit disappointed that there were so many similarities between this and previous shows. Where was the feed for my 80s nostalgia of “Like a Surgeon” and “Girls Just Wanna Have Lunch,” dammit? Then again, it’s Weird Al – you know what kind of shtick he’s going to pull, and you know he’s going to do it well. $30 and a rockin’ accordion later, you just can’t say that you didn’t have a good time.

For photos from the concert, check out this Weird Al slideshow courtesy of our friends at the Riverfront Times.